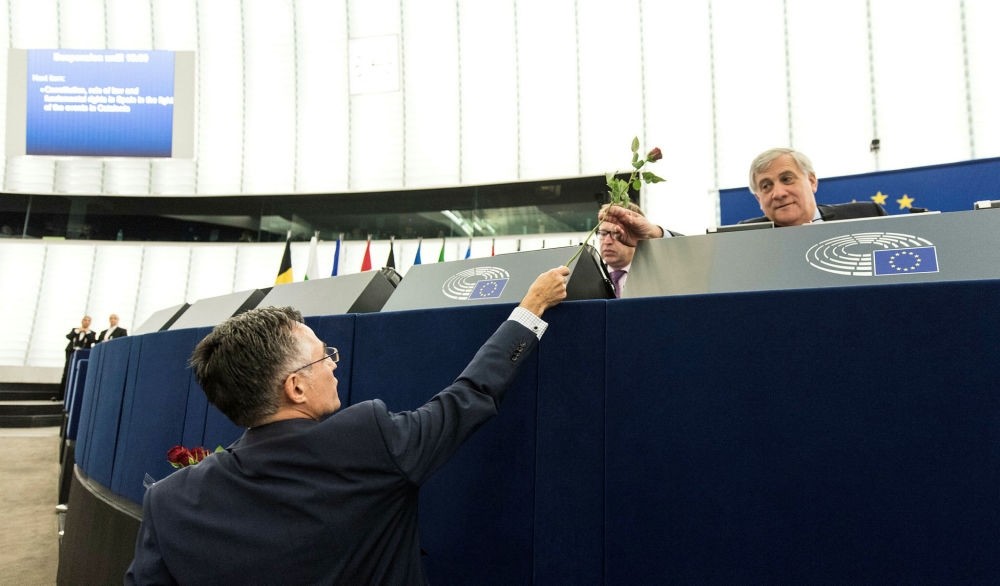 Amid increasing uncertainty over the territorial integrity and stability of EU member state Spain, the Catalan crisis poses a real challenge for the future of the already-battered EU.

The crisis has trapped the EU between the rock of its principle of non-interference in member states' internal affairs and the hard place of its role as a champion of democracy and freedom of expression. The European Commission, the bloc's executive arm, on Monday broke weeks of virtual silence on the subject after scores were hurt in clashes at Sunday's vote in Catalonia to say the referendum was not legal under Spanish law and was an internal matter for Madrid.

The response from Brussels after the dramatic scenes of violence in Barcelona, including riot police dragging voters from polling stations, has prompted accusations of hypocrisy. British euroskeptic Nigel Farage – normally the first to criticize the EU for interfering in the affairs of its member states – said it was "extraordinary to realize that the EU is prepared to turn a blind eye," and criticized commission President Jean-Claude Juncker for saying "not a dicky bird" about the violence.

Violence erupted last weekend during Catalonia's independence referendum outlawed by Madrid. Thursday's ruling raised the question of how the Spanish state will respond if Catalans decide to push ahead with Monday's session. If Catalonia declares independence, Spain could respond by suspending the region's existing autonomous status and imposing direct rule from Madrid. The speaker of the Catalan parliament, Carme Forcadell, warned such a move "would just increase support for the pro-independence side."

The head of the Greens in parliament also voiced astonishment at the commission's response, saying it undermined the EU's credibility in the eyes of its citizens.

Heightening the claims of double standards, the EU's muted response to the Catalan crisis has come as it is taking legal action against both Poland and Hungary over democratic issues.

A possible break from Spain could lead the bloc to disintegrate further just as it was beginning to contemplate the end of the Brexit and migrant crises and a bright new future for the bloc. With separatist movements affecting states across the continent, in Scotland, Flanders and Basque country of Spain, EU members were reluctant to get involved in the Catalan issue.

While the EU has called for dialogue, it has ruled out taking any mediation role itself. Instead, Switzerland said Friday it was in contact with both sides in Spain's political crisis in Catalonia but stressed that formal mediation could not begin until both camps were ready. Catalan President Carles Puigdemont has asked for international mediation after the region pushed ahead last Sunday with an independence referendum, defying Madrid and the national courts. In a statement, the Swiss Foreign Ministry said the Catalonia question was a matter of Spanish domestic policy. While Switzerland takes no position on the issues, it believes in "peaceful resolution through dialogue," the statement said.