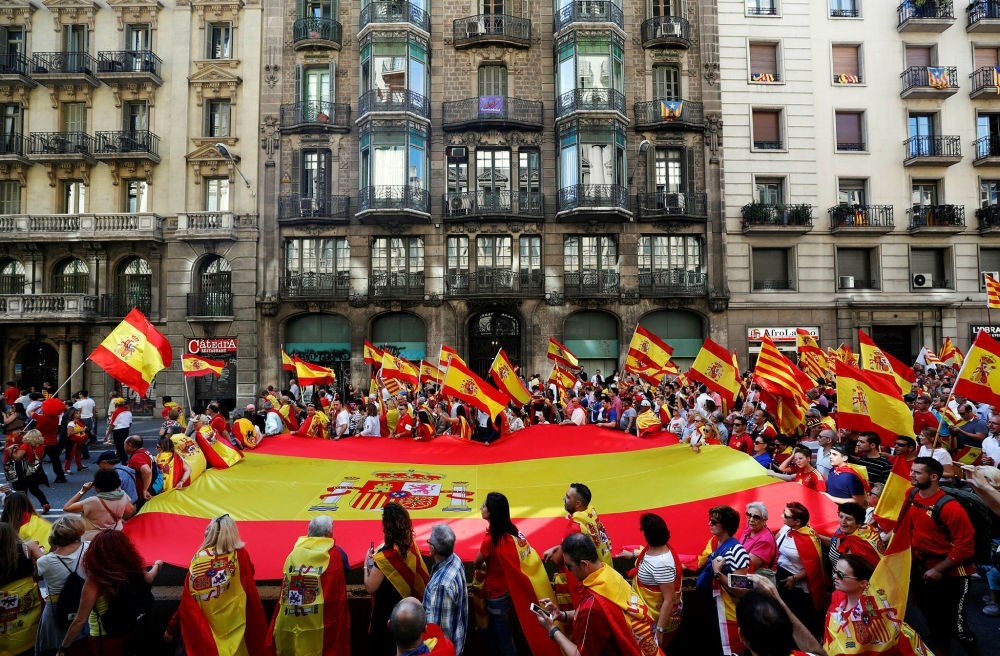 Protestors carry a giant Spanish flag during a rally in favor of the unity of Spain in Barcelona, Spain, Oct. 8.
by Compiled from Wire Services Oct 10, 2017 12:00 am

After hundreds of thousands of unionists took to the streets on the weekend to protest the region breaking away, Catalan President Carles Puigdemont maintained his threat to formally declare independence. Catalonia's High Court has asked for the Spanish national police to provide extra security at the court building in case the Catalan parliament goes ahead with a unilateral declaration of independence, the court said yesterday. The decision to ask for the Spanish national police to supplement the Catalan police guarding the building was made in order to increase the security of the building and to "guarantee its full and normal operation" in the event of a Catalan declaration of independence from Spain, the court said in a statement.

Under Catalonia's referendum law, deemed unconstitutional by Madrid, a vote for independence started a six-month process that would envisage divorce talks with Spain before regional elections and a final act of separation.

A declaration of independence would intensify the conflict with the central government, which along with the national courts has branded the referendum illegal. Madrid has the power to suspend the semi-autonomous status that Catalonia currently enjoys under Spain's system of regional governments.

Madrid says the independence referendum contravenes the constitution, which states that Spain is indivisible. Under Article 155 of Spain's constitution, Madrid has the power to intervene directly in the running of Catalonia's regional government, forcing it to drop the vote.

The Spanish government, buoyed by Sunday's protests in Barcelona, the Catalan capital, made it clear yesterday it would respond immediately to any such vote.

Spain's deputy prime minister said the Spanish government will be ready to act if Catalan separatist leaders go ahead and declare independence as they have promised.

"I'm calling on the sensible people in the Catalan government ... don't jump off the edge because you'll take the people with you," Spanish Deputy Prime Minister Soraya Saenz de Santamaría said in an interview with COPE radio.

"If there is a unilateral declaration of independence there will be decisions made to restore law and democracy."

The stakes are high for Spain as it faces its biggest political crisis since it became a democracy four decades ago. Losing Catalonia, which has its own language and culture, would deprive Spain of a fifth of its economic output and more than a quarter of exports. A stream of Catalonia-based firms and banks have moved their legal bases outside the region. The crisis has also reopened old divisions in a nation where fascism is a living memory easily revived by strong displays of nationalism.

Among many moderate Spaniards, though, there is widespread opposition to a breakaway, including in Catalonia. Most of the region's unionists boycotted the Oct. 1 referendum, which was banned by Madrid and marred by a violent police crackdown.

The European Union has also shown no interest in an independent Catalonia, despite an appeal by Puigdemont for Brussels to mediate in the crisis. France, which borders Catalonia, said on Monday it would not recognize a unilateral independence declaration.

On Sunday, a crowd estimated by local police to number 350,000, took to the streets of the Catalan capital Barcelona, waving Spanish and Catalan flags and carrying banners saying "Catalonia is Spain" and "Together we are stronger."

The show of support for Madrid helped calm Spanish markets yesterday, along with comments on Friday from credit rating agencies Moody's and DBRS that they expected Spain to remain united. Spanish borrowing costs fell to a one-week low and the main share index touched a week high.