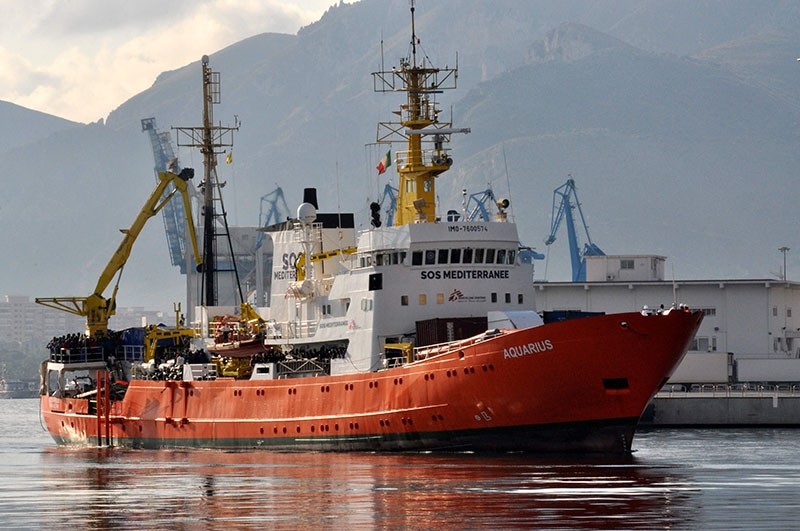 Migrants wait to disembark from rescue ship Aquarius run by NGO ,SOS Mediterranu00e9e, after a rescue operation at sea on October 13, 2017 in Palermo, Sicily. (AFP Photo)
by Associated Press Oct 13, 2017 12:00 am

Some 600 migrants rescued at sea arrived Friday in Sicily — one of the biggest influxes since Italy struck a deal with Libyan authorities to limit migrant smuggling — raising concerns of a renewed surge on the Libyan human trafficking corridor.

The migrants, including many unaccompanied minors from sub-Saharan Africa, were rescued in seven operations over 36 hours, and transported Friday to Palermo by the German non-governmental organization SOS Mediterranee.

They came as three weeks of fighting around the Libyan city of Sabratha has destabilized militias that pledged to help reduce the flow of migrant smuggling across the Mediterranean Sea, leaving many migrants and refugees displaced.

SOS Mediterranee President Valeria Calandra told Sky TG24 that the renewed instability in Libya has only increased the desire of migrants to escape the lawless North African country.

"It was very improbable that from today to tomorrow you can stop everyone," she said. "I think this rescue is the first of many others that will arrive."

The number of migrants dropped dramatically in July and August, before an uptick from 3,914 in August to 6,288 in September. Still, September arrivals were two-thirds below last year's total for the same month, and the 2,800 arrivals so far this month are well below the 12,400 in the same period last year.

A spokesman for the U.N. refugee agency in Rome, Federico Fossi, says it's too early to say what is driving the recent uptick and if it will be sustained. He noted that even the deal with Libyan forces to stanch the flow of migrants never fully stopped the smugglers' boats.

"In last few days, there has been a light increase. We need to see over the medium-term if there is a new trend," he said.

The UNHCR said Friday that fierce clashes over the last three weeks near Sabratha, some 80 kilometers (50 miles) west of Tripoli, have stranded 3,000 Libyan families, most of whom have since returned home, and displaced more than 10,000 refugees and migrants, who remain "in need of urgent assistance."

After taking control of detention centers that had been run by migrant traffickers, Libyan authorities transferred 4,500 migrants to a hangar in the Dahman area and others to detention centers near Tripoli, the refugee agency said.

UNHCR said it was sending emergency assistance including sleeping bags, hygiene kits, food and blankets to Libya. Many migrants were found without clothing or shoes, had suffered injuries requiring urgent medical care or were severely traumatized and in need of psychological support, the refugee agency said.

"'Overall, our team on the ground paint a very grim picture," UNHCR said.