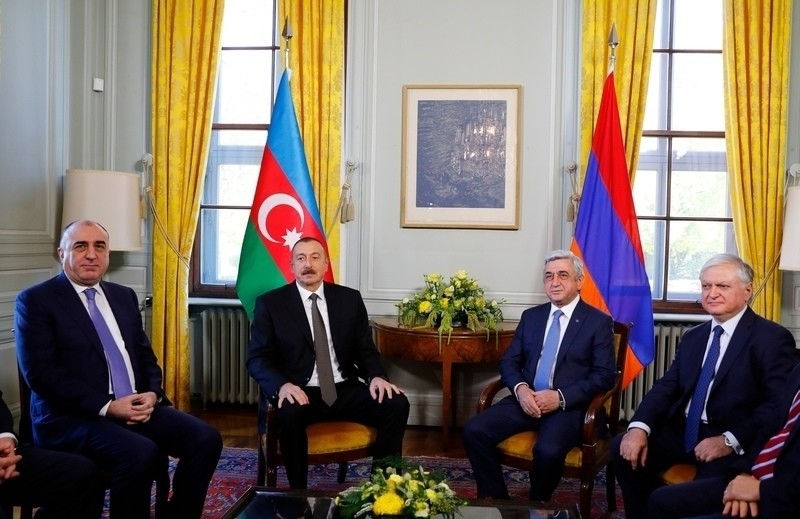 The presidents of Azerbaijan and Armenia agreed on Monday to reduce tension over occupied Nagorno-Karabakh and speed up talks to resolve the conflict.

It was the first meeting at presidential level between Azerbaijan's Ilham Aliyev and Armenia's Serzh Sargsyan to talk about the disputed territory after an earlier meeting in St. Petersburg, Russia in June 2016.

"The meeting took place in a constructive atmosphere," according to a joint statement from Geneva released with the co-chairs of the OSCE Minsk Group.

"The presidents agreed to take measures to intensify the negotiation process and to take additional steps to reduce tensions on the line of contact," the statement added.

Last month, Armenian Foreign Minister Eduard Nalbandian said that Yerevan could de-occupy some of the territories around Nagorno-Karabakh.

Occupied Nagorno-Karabakh is recognized as Azerbaijani territory by the international community but was taken over by Armenian secessionists as the Soviet Union broke up in early 1990s.

Nagorno-Karabakh broke away from Azerbaijan in 1991 with Armenian military support, and a peace process has yet to be implemented.

Despite a 1994 peace deal, border skirmishes are a frequent occurrence. In April 2016, these escalated into the worst outbreak of fighting since the war, resulting in the deaths of more than 270 military personnel.