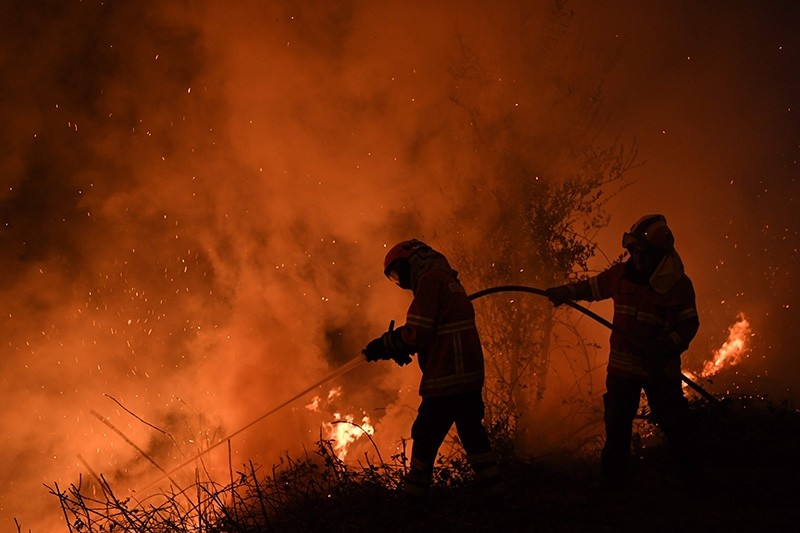 Firefighters try to extinguish a fire in Cabanoes near Louzan as wildfires continue to rage in Portugal on October 16, 2017. (AFP Photo)
by Compiled from Wire Services Oct 17, 2017 12:00 am

The number of people killed in Portugal's wildfires since Sunday has risen to 41, with 71 other people injured, authorities said, warning that the toll is likely to increase.

Of the 71 injured, 16 are in serious condition, she added.

Portuguese authorities reported that almost all major wildfires were out by Tuesday morning. Some 2,700 firefighters were deployed to prevent re-ignitions in the country's smoldering forests.

Investigations were underway to find the cause of the late-season wave of hundreds of forest fires, which Iberian officials blamed mostly on arsonists and freak weather conditions. Temperatures on the Iberian Peninsula exceeded 30 C (86 F) over the weekend and the area was raked by high winds as Hurricane Ophelia churned past in the Atlantic.

In Portugal, opposition parties rebuked the government for what they called a lack of preparedness.

The Civil Protection Agency's full fire-fighting contingent operates only during the traditional peak wildfire season, which runs from July 1 to Sept. 30. In October, its fire-fighting assets are reduced by half.

Critics say the state of readiness must be more flexible, especially when Portugal is gripped by drought and its weather patterns are affected by climate change.

Prime Minister Antonio Costa, who has rejected calls for members of his government to resign over the fire deaths, called a special meeting of his Cabinet for next Saturday to discuss fire-fighting measures.

"This is not a time for resignations, this is a time for solutions," Costa said.

But public outrage is simmering. Local governments in the worst-hit areas, aided by a social media campaign, are organizing silent street protests in Lisbon and in their own towns and cities to coincide with the Cabinet meeting.