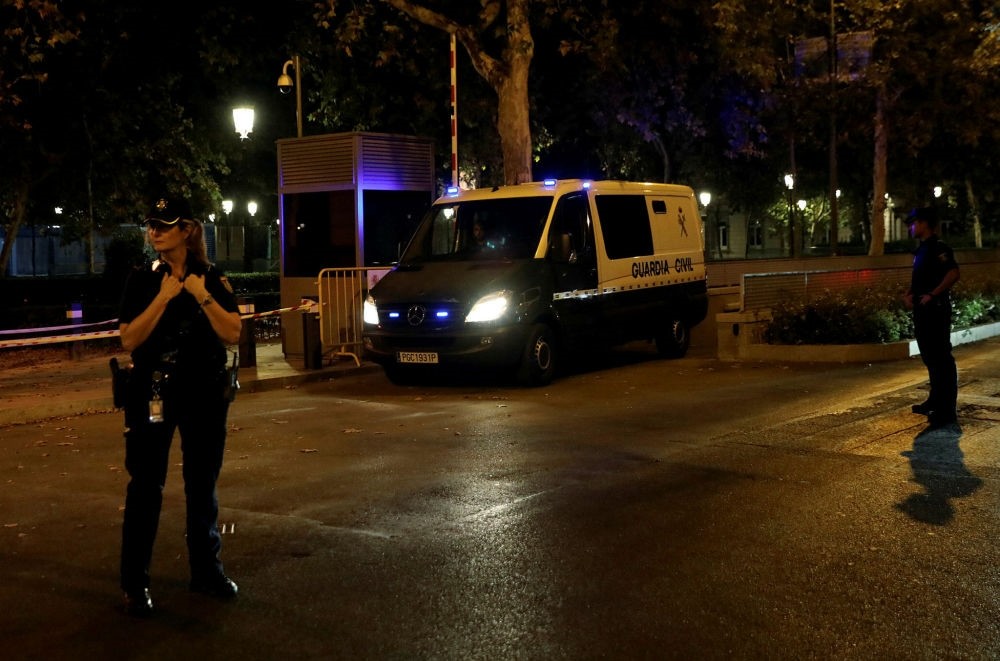 A Spanish Civil Guard van carrying the leaders of two pro-independence groups leaves the High Court in Madrid, Oct. 16.
by Compiled from Wire Services Oct 18, 2017 12:00 am

A Spanish court has ordered two powerful Catalan separatists to be detained, threatening a further escalation of the political crisis as both sides refuse to budge in their high-stakes standoff over the region's independence bid.

Protests broke out in Catalonia's capital Barcelona on Monday as news spread that Jordi Cuixart and Jordi Sanchez were being kept behind bars on sedition charges.

The pair are the leaders of pro-independence citizens' groups Omnium Cultural and the Catalan National Assembly (ANC) respectively, both of which count tens of thousands of members and have emerged as key players in the Catalonia crisis. They are accused of stirring up major protests in the run-up to the banned October 1 independence referendum in the region of 7.5 million people which has its own language and culture.

The detention of Catalan activists on Monday, the first imprisonment of senior secessionist figures since the region's Oct. 1 banned referendum on independence, was a judicial, not a political, matter, Spain's justice minister said yesterday. "These are not political prisoners because yesterday's prison ruling was due to a crime [that was committed]," Justice Minister Rafael Catala said at an event in Madrid.

Calls for protest spread on social media with demonstrations planned in Catalonia and beyond, including London. Some people stopped work briefly at midday to call for the "release of political prisoners".

Hundreds of independence supporters gathered outside Catalan government offices, some singing the region's hymn and holding signs that read "Freedom for political prisoners".

Prior to his detention, Jordi Cuixart recorded a video message to be released only if he was held, which was sent out overnight.

"If you're watching this video, it's because the state has decided to deny me my freedom," he said, adding that his organization would work "underground" and peacefully to further their cause.

Catalan police chief Josep Lluis Trapero also appeared in court on sedition charges, facing up to 15 years in jail for allegedly encouraging protests and failing to stop the referendum -- though he was allowed to walk free.

The ruling against Cuixart and Sanchez came after another day of twists and turns as Spain struggles with its worst crisis since it returned to democracy in 1977.

Madrid warned Catalonia's separatist leader Carles Puigdemont he only had three days to "return to legality" after he refused to say whether he would declare independence outright following the referendum outlawed by the courts and Madrid.

He had been initially ordered to give his answer by Monday, but stopped short of giving a definitive response and instead called for talks with Prime Minister Mariano Rajoy.

Spain has given him until 0800 GMT on Thursday to clarify, but anything less than a full climb-down is likely to prompt moves by Madrid to impose unprecedented direct control over the semi-autonomous region.

It was the first time that Rajoy openly said that Article 155 of the Spanish constitution will be the next step taken by the government if Catalan authorities don't backtrack. He said the government "wants to offer certainty to citizens" and that it is "necessary to return tranquility and calm."

Under that article, the central government could take control of the governance of a region, a never-before used provision that has been referred to as the "nuclear option."

Article 155 of the Constitution allows the central government to take some or total control of any of its 17 regions if they don't comply with their legal obligations. This would begin with a Cabinet meeting and a warning to the regional government to fall into line. Then, the Senate could be called to approve the measure.