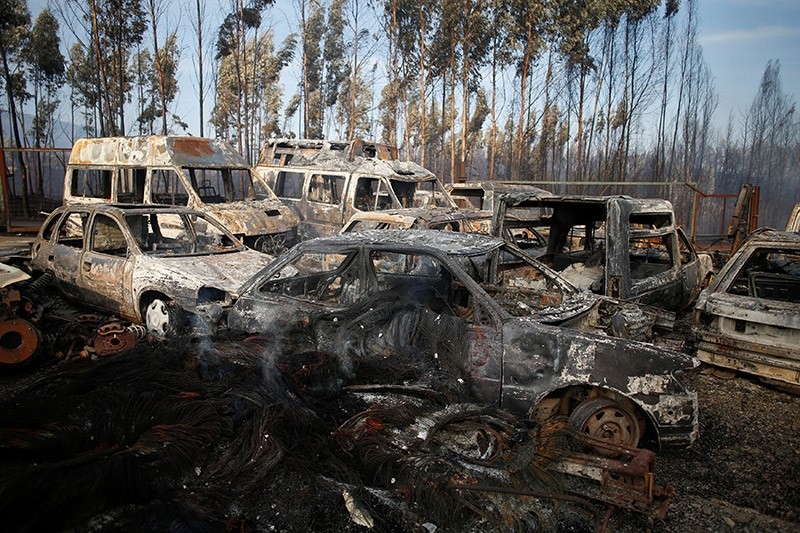 Portugal's Interior Minister Constanca Urbano de Sousa resigned from her post after fires killed more than a hundred people in the country's two worst disasters of recent times, the government said on Wednesday.

The minister said in her resignation letter that after the fires of recent days "I considered that I didn't have the political and personal conditions to continue in my post."

Overnight rain and calmer winds have helped firefighters tame a spate of deadly wildfires that broke out over the weekend, devouring homes and killing 41 people in Portugal and another four in northern Spain.

Portugal's civil protection agency said Tuesday that the 15 biggest fires, which had raged through the center and the north of the country, had been brought under control, but that the death toll had risen.

As the country began three days of mourning for the victims, the agency said 71 people had been injured in the fires, 16 of them seriously. And one person was still missing.

Among the dead was a one-month-old baby.

"Most of the victims were killed in their cars, but we also found them inside their houses," said Jose Carlos Alexandrino, mayor of Oliveira do Hospital near Coimbra, speaking to broadcaster RTP.

"The whole city looked like a ball of fire, surrounded by flames on all sides."

It is the second time in four months that Portugal has been hit by deadly wildfires after huge blazes in June killed 64 people, the worst fires in the country's history.

The blazes which broke out on Sunday were blamed on arsonists and fanned by the passing of Ophelia.

Lisbon declared a state of emergency in areas north of the Tagus river, the longest river in the Iberian Peninsula which effectively cuts Portugal in half and also runs through Spain.

For the second time in four months, Portugal held a three-day mourning period, while in Brussels, the European Commission's flags were lowered to half-mast as a sign of respect for victims in both countries.

Since the start of the year, more than 350,000 hectares (865,000 acres) of vegetation have been consumed across Portugal -- four times the annual average over the past decade -- according to an estimate from the European Forest Fire Information System.

Portugal is covered with fast-burning eucalyptus trees which are used to supply the country's paper industry, and it is also vulnerable to strong winds coming off the Atlantic.