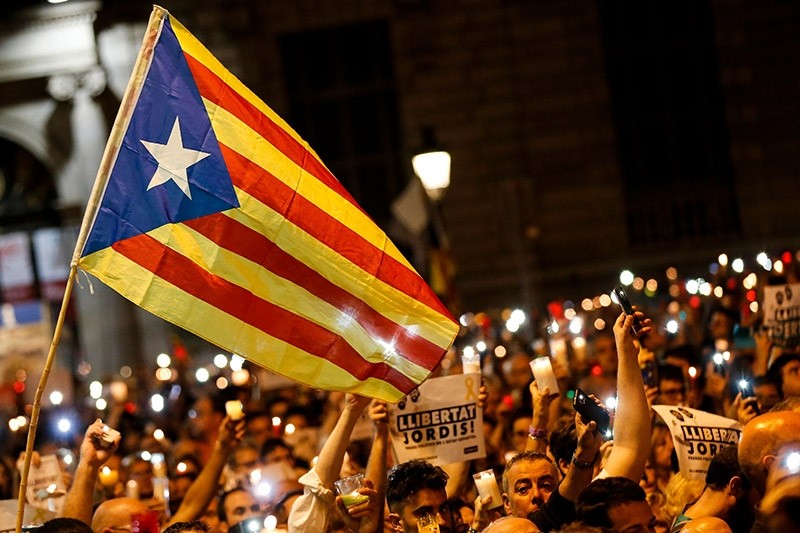 People hold candles and a Catalan pro-independence 'Estelada' flag during a demonstration in Barcelona against the arrest of two Catalan separatist leaders on October 17, 2017. (AFP Photo)
by Compiled from Wire Services Oct 18, 2017 12:00 am

If separatist leader Carles Puigdemont does not provide a satisfactory response by 0800 GMT Thursday, "Mr Puigdemont will provoke the application of article 155 of the constitution," Soraya Saenz de Santamaria told parliament.

This provision of the constitution -- which has never been used before -- would open the way for Madrid to impose direct rule over the semi-autonomous region.

Triggering it could represent a drastic escalation of Spain's worst political crisis in decades which was sparked when Catalonia held a banned independence referendum on October 1.

"I ask Puigdemont to act sensibly, in a balanced way, to put the interest of all citizens first," Rajoy said in parliament.

Rajoy has given Puigdemont until Thursday to come up with a definitive answer on the independence question, or face the consequences.

The premier would need Senate approval to trigger article 155, but his conservative Popular Party has a majority there.

The move could ultimately allow Madrid to suspend the regional government and eventually trigger new elections for Catalonia, but such a move risks inflaming tensions in the region even further.

Puigdemont declared independence following the poll which he says resulted in a 90 percent "yes" vote, though turnout was only 43 percent as many supporters of Spanish unity stayed away in a region that is deeply divided on the issue.

But the Catalan leader said he was "suspending" independence to allow time for talks with the government -- a prospect Madrid has rejected, leaving the country in limbo.