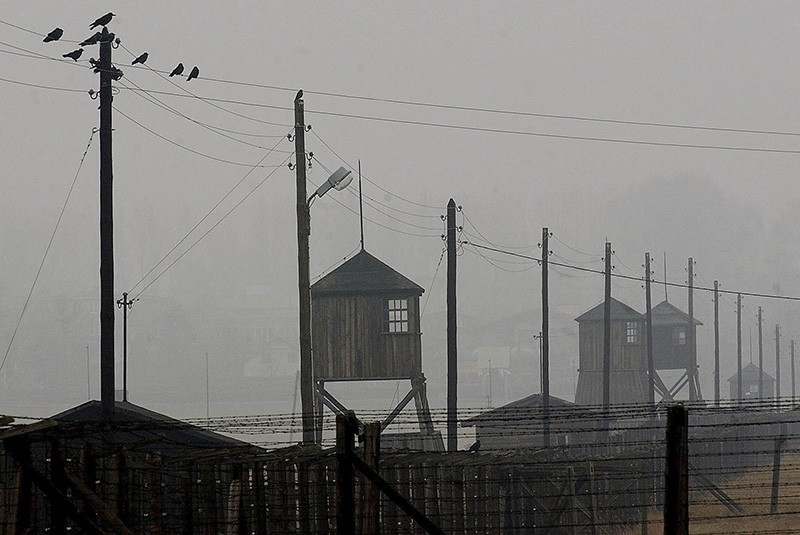 In this Nov. 9, 2005 file photo watch towers and the barbed wire fence of the former Nazi death camp Majdanek are photographed outside the city of Lublin in eastern Poland. (AP Photo)
by Compiled from Wire Services Oct 20, 2017 12:00 am

A former guard at the Majdanek death camp in Nazi-occupied Poland has been charged in Germany with being an accessory to murder for allegedly serving there during a period when at least 17,000 Jews were killed, Frankfurt prosecutors said Friday.

The 96-year-old Frankfurt resident, whose name wasn't released under German privacy regulations, is alleged to have served at the death camp near the Polish city of Lublin between August 1943 and January 1944.

"According to the evidence available, the accused knew about the cruelty of the organized mass killings, just like all other members of the SS at the camp," it said in a statement.

"He also knew that these people, facing their fate innocently and defenselessly, were killed for inhuman reasons based on race," it added.

The former guard, who now lives in Frankfurt, was in particular allegedly involved in the so-called "Operation Harvest Festival", in which at least 17,000 Jews were shot in November 1943 in graves that the victims themselves were made to dig.

"He knowingly and willingly contributed to these insidious and cruel acts," added the prosecutors.

The prosecutor's charges are based on an investigation by the Central Office for the Investigation of Nazi Crimes and on historical documents found as part of the investigation.

No trial date has been set.

More than 70 years after the end of World War II, German prosecutors continue to bring new cases against former Nazi war crimes suspects. Due to their advanced ages, the task of getting suspects to trial is getting increasingly difficult.

Germany has faced criticism for not prosecuting those who were small cogs in the Nazi machine and did not actively take part in the killing of six million Jews during the Holocaust.

That criticism has abated following many recent trials and convictions, including the 2011 conviction of Sobibor extermination camp guard John Demjanjuk, which gave prosecutors new legal means to investigate suspects under accessory-to- murder charges.

Former Auschwitz guard Reinhold Hanning and Oskar Groening, known as the "bookkeeper of Auschwitz", have also been convicted of complicity in mass murder in recent years.

But cases against a former radio operator and a former paramedic at the Auschwitz death camp were dropped as the elderly defendants were found to be unfit to stand trial.

All these recent cases were tried using a new standard of evidence: that it was sufficient to work at a death camp to be prosecuted, even without proof of a link to specific deaths