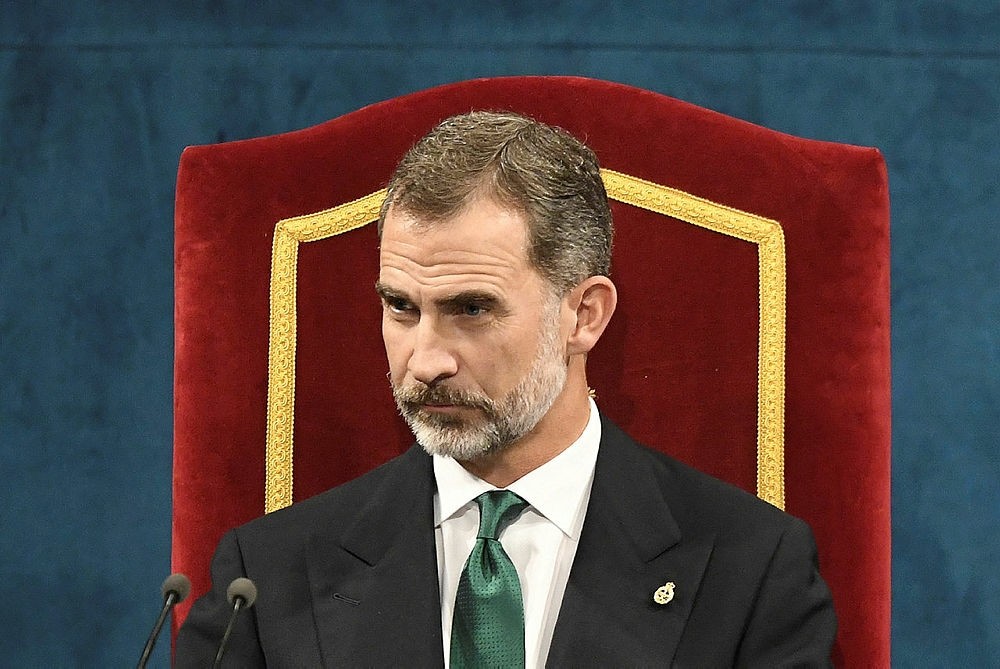 Spain's King Felipe VI on Friday blasted what he said was an "unacceptable secession attempt" by Catalonia as the government prepared for unprecedented steps to take back some of the crisis-hit region's powers.

European Union leaders, in Spain to collect a prestigious peace prize, gave their backing to Madrid with EU parliament chief Antonio Tajani warning that attempts to redraw European borders have often "resulted in a hellish mess".

In an unusually emotional speech at the ceremony in Oviedo, King Felipe described Catalonia as "an essential part of 21st century Spain" and said the crisis sparked by the region's banned Oct. 1 independence referendum must be resolved "through legitimate democratic institutions".

"We do not want to give up that which we have built together," he pleaded.

The king spoke as Prime Minister Mariano Rajoy's cabinet prepared to meet Saturday to set out the powers it plans to seize from the northeastern region as its leader Carles Puigdemont refuses to abandon his threat to declare a breakaway state.

Autonomy is a hugely sensitive issue in Catalonia, which saw its powers taken away under Spain's military dictatorship. Home to 7.5 million people, the region fiercely defends its own language and culture.

Catalonia's government currently runs its own policing, education and healthcare, but reports said Rajoy was preparing to potentially take control of its police force, the Mossos d'Esquadra.

It could also force new elections in the Catalan parliament, where separatists have held a majority since 2015.

Speaking at an EU summit in Brussels -- where the crisis has added to the woes of a bloc already struggling with Brexit -- Rajoy said a "critical point" had been reached and that his government had to act to stop the rule of law being "liquidated".

Puigdemont says he has a mandate to declare independence after the referendum, which his administration says resulted in a 90 percent Yes vote.

But turnout was given as only 43 percent as many Catalans who back unity stayed away from a vote which had been ruled unconstitutional.

EU President Donald Tusk and parliament chief Tajani, who were in Spain with European Commission chief Jean-Claude Juncker Friday to receive the Princess of Asturias Concord Prize, both urged respect for the law in their acceptance speeches in apparent reference to Catalonia.

"Some are sowing discord by deliberately ignoring law," Tajani said at the ceremony in the northern city of Oviedo.

He added pointedly: "All too often in the past the prospect of redrawing borders has been presented as a heavenly panacea that has resulted in a hellish mess."

The Catalan standoff has sparked huge street rallies and worried investors as Spain emerges from the financial crisis.

On Friday, hundreds of separatists queued at Catalan banks to take out large amounts of cash in protest against Madrid.

Some protesters made symbolic withdrawals of 155 euros ($183) -- a reference to Article 155 of the constitution, the never-before-used measure that Madrid is employing to start taking control over Catalonia.

Others opted for 1,714 euros ($2,023) in a nod to 1714, a highly symbolic date for independence supporters marking the capture of Barcelona by the troops of King Felipe V, who then moved to reduce the rights of rebellious regions.

"It's the only way in which Catalans can show their disagreement with the attitude of the Spanish state," said Roser Cobos, a 42-year-old lawyer who had just taken out 1,714 euros.

Bank chains said the protest had a negligible impact on operations, and as economic jitters grow over the crisis, regional business minister Santi Vila said the action was unhelpful.

"Putting stress on the banks or pursuing economic boycotts are not the best way forward," he tweeted.

The ongoing limbo is putting a strain on one of Spain's most important regional economies, which makes up about a fifth of national output.

Nearly 1,200 companies have shifted their registered domiciles to other parts of Spain, while the national growth outlook for next year has been cut from 2.6 to 2.3 percent.

Polls suggest Catalonia is evenly divided over whether to break away from Spain.

Separatists complain that it pays more into the national coffers than it gets back, but their opponents say independence would spell economic and political disaster.