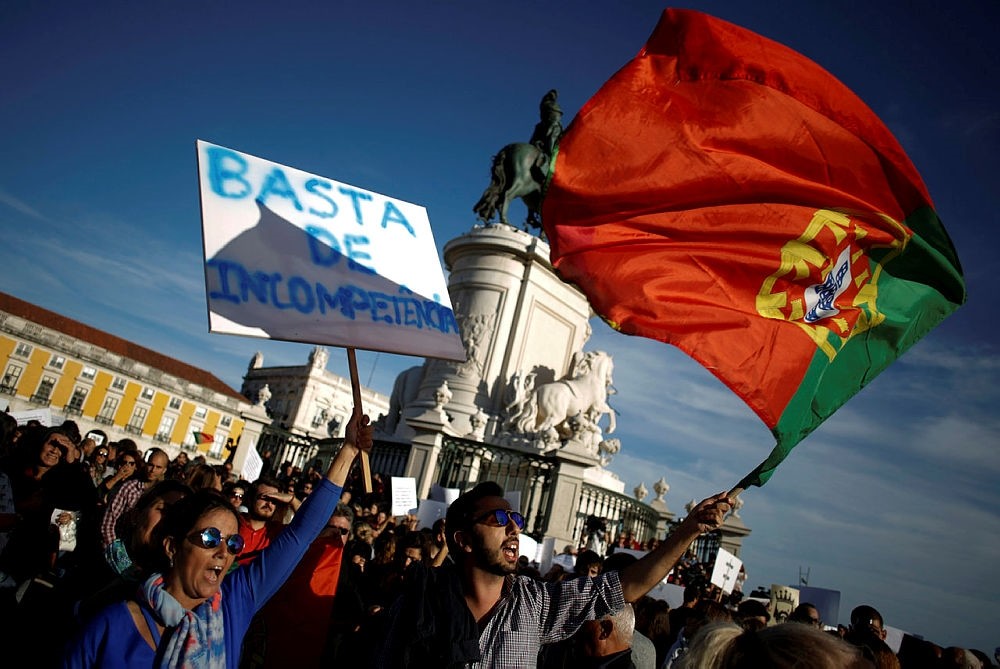 A woman holds a poster saying ,enough incompetence, during a demonstration in a tribute to the victims of the deadly fires in Portugal, in Praca do Comercio square, downtown Lisbon, Portugal Oct. 21, 2017. (Reuters Photo)
by Oct 21, 2017 12:00 am

As thousands of Portuguese protested on Saturday over the government's handling of massive wildfires that have killed 108 people since June, government ministers pledged to spend over 400 million euros ($470 million) in aid.

The decision, announced during a special cabinet meeting which continued into the night, came on the same day as a new interior minister took over after his predecessor resigned, and ahead of Tuesday's parliamentary vote on a motion of no-confidence launched by the opposition.

Earlier thousands of protesters gathered on Lisbon's main Comercio square, in Porto and other cities to mourn the victims of the Portugal's worst tragedy in living memory and demand better fire prevention policies in the country, which despite its relatively small size has suffered the largest forest fires in Europe this year.

"Enough! Too many deaths, too much destruction!" read many slogans. A few called for the government's resignation.

The cabinet considered a detailed report by independent experts on the first wave of forest fires in June when 64 people died in central Portugal, and the first official accounts of the more widespread fires on Oct. 15-16, which killed 44.

The main report pointed to failures on practically every level from fire prevention and monitoring during an unusually hot and dry summer to civil protection response, emergency communications and the alerting of the population.

The government decided on Saturday to hire hundreds of forest sappers to maintain forests and to prevent fires, ordered a major clean-up of safety strips along motorways and railroads and promised to support the collection of forest waste for biorefineries.

The state will also take a sizeable stake in the emergency communications network SIRESP, whose equipment failed on many occasions during the fires. Another likely measure would put the air force in charge of firefighting aircraft which are currently hired and managed by the civil protection service, local media said.

The promised state aid for affected areas includes paying compensation to the families who lost relatives and homes, funding for reconstruction works and support to save local jobs.

The minority Socialist government has been weakened by the public clamour, but the impact on its strong approval ratings achieved due to an improving economy has been limited so far.

Also, the support of its left-wing allies in parliament means the no-confidence motion is not expected to be passed.

An opinion poll by Aximage pollsters for Correio da Manha daily, which surveyed 603 people on Oct. 14-17, showed support for the Socialists had dropped by 1.1 percentage points to 41.9 percent, still far ahead of the closest rival, at 23.8 percent.