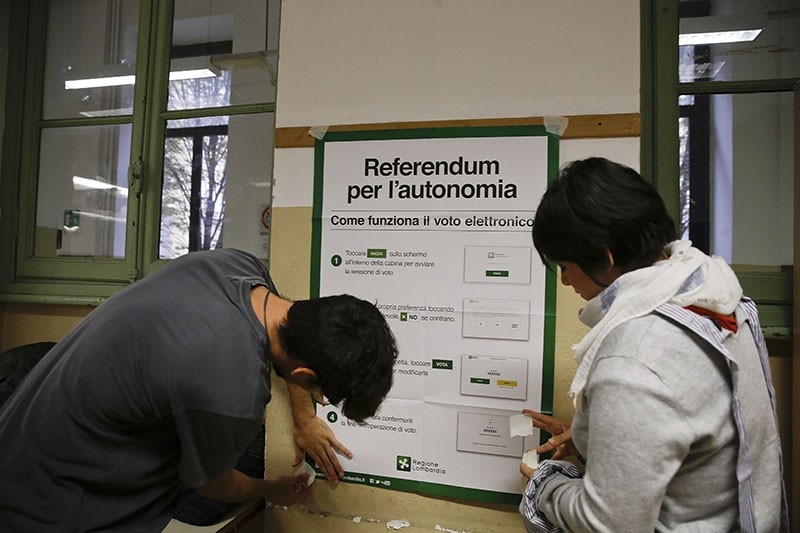 Voters in the wealthy northern Italian regions of Lombardy and Veneto are heading to the polls to decide if they want to seek greater autonomy from Rome, riding a tide of self-determination that is sweeping global politics.

While the twin referendums Sunday are non-binding, a resounding "yes" vote would give the presidents of the neighboring regions more leverage in negotiations to seek a greater share of tax revenue and to grab responsibility from Rome. The leaders want more powers in areas such as security, migration, education and the environment.

Lombard President Roberto Maroni has lowered expectations, saying he would be happy with a 34 percent turnout among the region's 7.5 million voters, equal to the national turnout in a 2001 constitutional referendum.

The Veneto autonomy drive dies if voter turnout is below 50 percent plus one of the region's 3.5 million voters.

Even though the referendums — which are approved by Italy's constitutional court — don't seek independence, the autonomy drive is a powerful threat to Rome's authority.

Lombardy, which includes Milan, and Veneto, which houses Venice, are home to around a quarter of Italy's population and account for 30 percent of its overall economic output.

Both regions are run by the anti-migrant, anti-Europe Northern League, which has long given up its founding goal of secession as it seeks a national profile. Also supporting the referendum is former Premier Silvio Berlusconi's Forza Italia and the populist 5-Star Movement.

With the Democratic Party urging its voters to abstain, the votes Sunday will measure the mood ahead of a national election next year, when Berlusconi says he will make autonomy a goal for all of Italy's regions.

Critics of the referendum argue that the non-binding vote carries no legal weight, is not needed to trigger autonomy negotiations and is a costly waste of resources.

Yet such arguments play into the hands of the "yes" campaigners, who see such put-downs as part of an anti-democratic, elite, centrist decision-making in Rome. Those sentiments have been echoed in the Catalan independence drive in Spain, in the U.S. election of Donald Trump as president and in Britain's vote to leave the 28-nation European Union.

The Italian constitution already grants varying levels of autonomy to five regions in recognition of their special status: the largely German-speaking Trentino-Alto Adige; the French-speaking Aosta; the islands of Sardinia and Sicily; and the region of Friuli-Venezia Giulia for its position on the border with then-Yugoslavia as a Cold War hedge.

Veneto was twice denied by the constitutional court to chance to hold a referendum for autonomy before a 2001 constitutional change that allowed Italy's 15 regions to seek autonomy.

These votes Sunday are the first referendums to pose the question to voters, while Emilia Romagna, a center-left region, has recently opened talks with Rome on greater autonomy without a popular vote.

With dynamic economies and lower unemployment and welfare costs than the Italian average, both regions are large net contributors to the coffers of a central state widely regarded as inefficient at best.

"Our taxes should be spent here, not in Sicily," says Giuseppe Colonna, an 84-year-old Venetian whose sentiments appear to be widely shared in the floating city.

Veneto President Luca Zaia says 30 billion euros ($35 billion) are wasted every year at a national level and fiscal rebalancing will be a top priority for him and his Lombardy counterpart Maroni if the votes go their way.

Lombardy sends 54 billion euros more in taxes to Rome than it gets back in public spending. Veneto's net contribution is 15.5 billion.

The two regions would like to roughly halve those contributions -- a concession the cash-strapped state, laboring under a mountain of debt, can ill afford.

The two regional presidents, both members of the far-right Northern League, plan to ask for more powers over infrastructure, the environment, health and education.

They also want new ones relating to security issues and immigration -- steps which would require changes to the constitution.

All of this will take time if it happens at all. But the referendums could have a domino effect in the shorter term. A similar autonomy vote is being debated in Liguria, the region that includes the Riviera coastline, and Emilia Romagna, another wealthy industrial part of the country, is already trying to negotiate more devolved powers.

Economist Lorenzo Codogno says that while Italian unity is not under threat, Sunday could mark the opening of a Pandora's box.

"The issue is likely to spread, and eventually, it will require a generalized approach by the next government and a reform of the constitution."

Although the referendums have been driven by the Northern League, which has long abandoned the secessionist principles on which it was founded, the Yes campaign is backed by most of the center right and sections of the center left.

Milan's mayor Giuseppe Sala, a member of the ruling Democratic Party, says greater self-rule "is an idea shared by everyone, not one that belongs to the League."

There is also a substantial body of opinion that regards the votes as unnecessary extravagances: organizing them will cost 50 million euros in Lombardy and 14 million in Veneto.

The referendum questions are framed differently in the two regions but both ask voters to say Yes or No to "further forms and special conditions of autonomy."

In a first for Italy, voting in Lombardy will be conducted on computer tablets. Acquiring them raised the cost of the ballot but should ensure an early result after the polls close at 11:00 pm (2100 GMT). They open at 7:00 am.