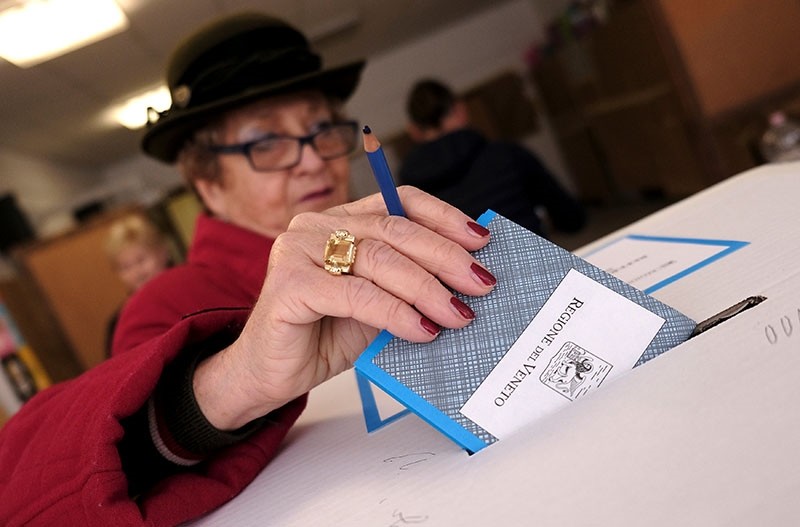 A woman casts her vote for Veneto's autonomy referendum at a polling station in Venice, Italy (Reuters Photo)
by Compiled from Wire Services Oct 23, 2017 12:00 am

In Veneto, a projected 98 per cent of voters voted in favour of more autonomy, with voter participation was estimated at around 59 per cent, meaning the vote will be considered valid.

Zaia also said that the announcement of the results was delayed due to a suspected hacker attack on the regional government.

In Lombardy, where no quorum was required, participation was around 40 per cent. An estimated 95 per cent voted "yes" according to regional leader Roberto Maroni.

"I have an important task to implement the historic mandate, that millions of people in Lombardy have issued, to gain real autonomy," Maroni said.

Some 10 million people were asked to decide whether their regional governments should receive more powers, especially regarding making sure that less of the money made in the regions went to Rome.

The referendums are not legally binding and are meant to give weight to the regions' dealings with Rome.

The right-wing populist Northern League party has been stoking the desire for autonomy, with an original goal of splitting Italy's rich north from its poorer south, although it has more recently softened its hardline approach.

Lombardy and Veneto are home to around a quarter of Italy's population and account for 30 percent of its economic output.

They also want new powers relating to security issues and immigration, steps which would require changes to the constitution.

"We have said for ages that we want to take this path to autonomy, we are doing this in a democratic and legal way, in accordance with the constitution," Zaia said earlier Sunday.

Zaia reiterated, however, that the region's aspirations were not comparable to the secessionist agenda that has provoked a constitutional crisis in Spain.

Italy's referendum comes with the backdrop of the Oct. 1 vote in Spain's Catalonia region that has since led to protests and political hand-wringing.