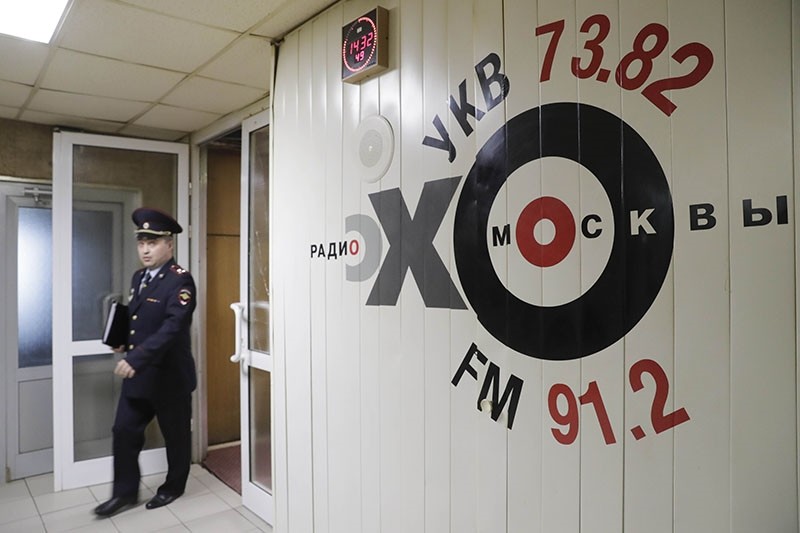 Inside the Russian radio station Ekho Moskvy, where an intruder attacked anchor Tatyana Felgengauer in Moscow (Reuters Photo)
by Oct 23, 2017 12:00 am

A Russian journalist was in a "serious condition" after an unknown assailant on Monday forced his way into the offices of a radio station critical of the Kremlin and stabbed her in the neck.

Tatyana Felgengauer, a 32-year-old presenter for Echo of Moscow, was attacked after the suspect entered the radio station's building in central Moscow and blinded the security guard with a spray, editor-in-chief Alexei Venediktov said.

"He then came with a knife and stabbed Tanya," Venediktov told reporters.

"There was a lot of blood and she was in shock," the editor said, adding that the attacker, who was overpowered by a security guard, had appeared to be aiming at her.

The Investigative Committee, which probes serious crimes, said it has opened a criminal case against a 48-year-old man on suspicion of attempted murder.

Citing preliminary information, Moscow police said the attacker was driven by "personal animosity" and that he was a "citizen of a foreign country."

Venediktov said he was told "there was no threat to life but she is in a serious condition," adding that Felgengauer had been able to get out of the building on her own two feet.

"We are waiting to find out what will happen after an operation."

Felgengauer is one of the radio station's deputy editors and a longtime presenter of a morning news programme.

She is also actively involved in opposition rallies and has thousands of followers on her public Facebook page.

The Echo of Moscow radio has been the mouthpiece of the country's liberal opposition since the Soviet era, with its editorial policy frequently putting it on political thin ice.

It is majority owned by Gazprom Media, the media arm of Russian natural gas giant Gazprom.

Russia has a disturbing record of attacks on journalists, with 58 killed since 1992, according to the Committee to Protect Journalists. Threats made against journalists often go unaddressed and attacks are not investigated.

Another Echo of Moscow presenter Yulia Latynina this year left Russia after a series of attacks on her car and home.