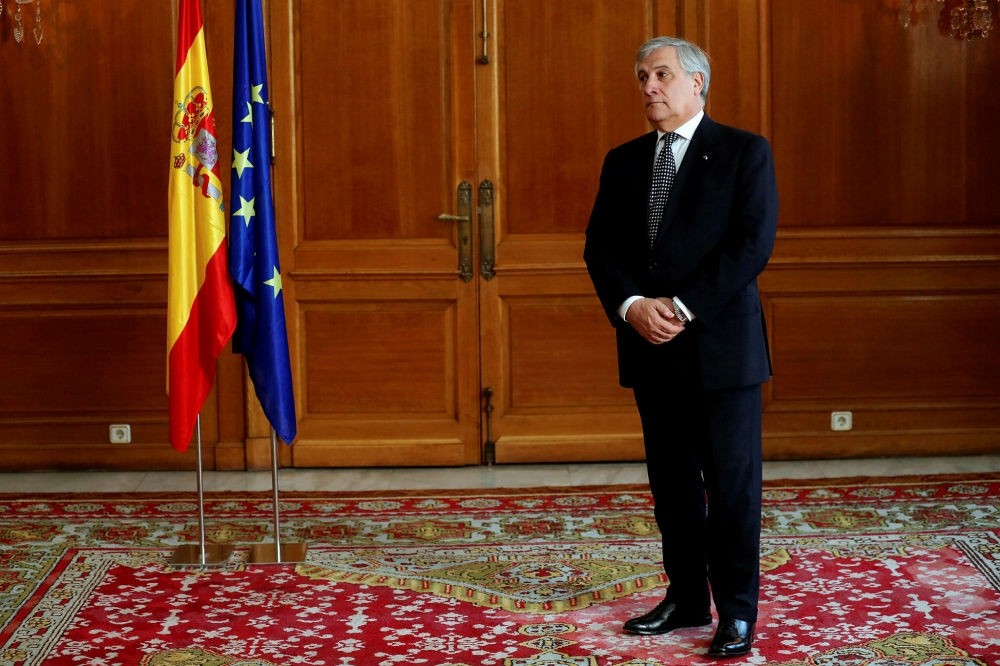 European Parliament chief Antonio Tajani stressed the growing threats over the European Union's unity and stability.
by Compiled from Wire Services Oct 24, 2017 12:00 am

As Madrid strives to prevent Catalonia from breaking away, two wealthy regions of northern Italy voted overwhelmingly for greater autonomy in referendums that could fan regional tensions while rattling the European Union

European Parliament Chief Antonio Tajani said that Europe should fear the spread of small nations. His warning comes as Spain struggles with the Catalonia crisis and voters in the economically powerful northern Italian regions of Lombardy and Veneto have overwhelmingly opted for more autonomy from Rome in a referendum. In an interview with the Rome daily Il Messaggero, the Italian politician said Europe must "of course fear" the proliferation of small nations. "That's why nobody in Europe intends to recognize Catalonia," he said. "Even [British Prime Minister] Theresa May, in the full throes of Brexit, said the United Kingdom would never recognize Catalonia."

"Spain is by its history a unified state, with many autonomous regions, with diverse populations who also speak different languages but who are part of a unified state," he added. "It is not by degrading nationhood that we reinforce Europe."

Tajani, who belongs to the center right European People's Party, took care to distinguish between Catalonia's chaotic independence referendum, deemed illegal by the Spanish government, and Sunday's votes in Italy.

"First of all these two referendums are legitimate, that was not the case in Catalonia," he said. "In Spain, it is not about autonomy, but a proclamation of independence in defiance of the rule of law and against the Spanish constitution."

In the fallout from the referendum, Spain's government says it had no choice but to use previously untested constitutional powers to seize control of the region in order to preserve the unity of the country.

Madrid could take control of the Catalan police force and replace its public media chiefs. Under the constitutional measures, new elections for the regional parliament must be called within six months.

Regional leader of Catalonia Carles Puigdemont will lose all power and stop receiving a salary once the senate approves article 155 that imposes direct central government rule on the region, the country's deputy prime minister said yesterday.

A single representative may be temporarily instated by Madrid to govern the region after the senate approves direct rule, Soraya Saenz de Santamaria said in a radio interview. The senate is expected to approve the measures on Friday.

Against the backdrop of Catalonia's push for independence, two of Italy's wealthiest northern regions Sunday voted overwhelmingly in favor of greater autonomy.

The referendum comes hot on the heels of a disputed independence vote in the Spanish region of Catalonia and adds to the potential instability of the Europe Union which is also rattling with Brexit.

Unlike Catalonia's Oct. 1 independence referendum, which Spain had declared unlawful, the Italian votes were held in line with the constitution. But they are not binding on Rome.

Lombardy, home to financial hub Milan, accounts for about 20 percent of Italy's economy, which is in turn the euro zone's third largest. Veneto, which includes the tourist magnet Venice, accounts for 10 percent.

In both regions, many people complain their taxes are wasted by the central government, accusing Rome of delivering low-quality public services and diverting money to the poor south.

Lega Nord was established in the 1990s to campaign for an independent state of "Padania," stretching across Italy's north, from around Lombardy in the west to Venice in the east.

It no longer campaigns for secession and its top leadership is trying to broaden its appeal beyond the north ahead of national elections expected early next year, a goal that could be undermined if the referendums rekindle north-south tensions.

Lega's political opponents say the votes were a waste of time and money, given that the constitution allows regions to enter into negotiations at any time with Rome to take on more functions from the center.

Political experts say neither region is likely to succeed in wresting much money away from the central government without causing problems for regions in Italy's poor south.