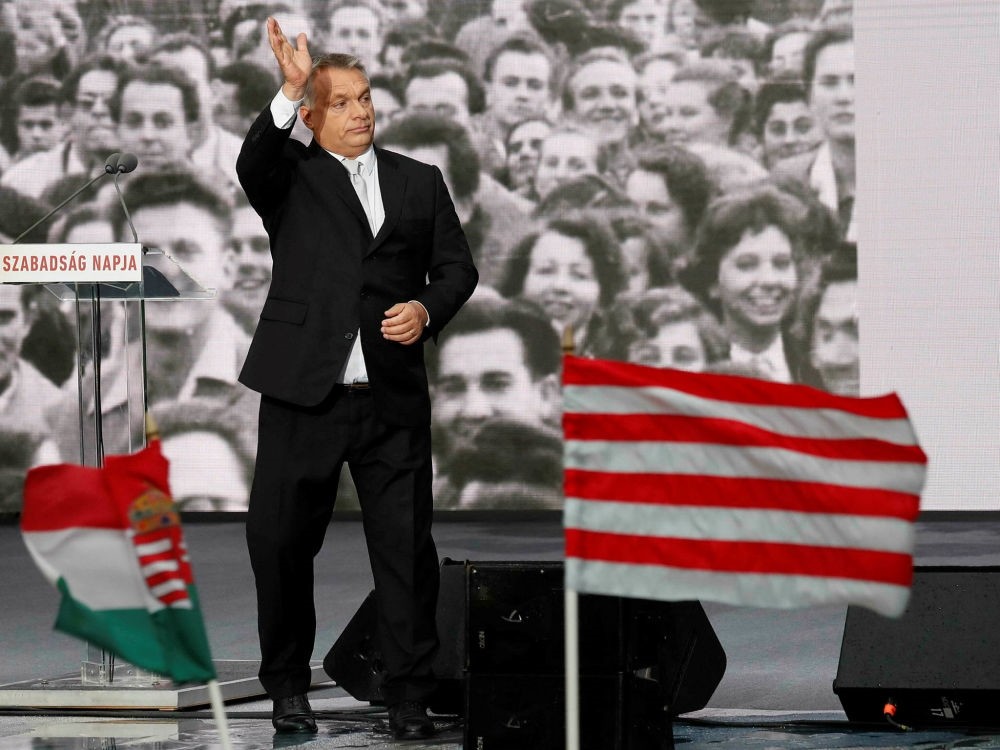 Hungarian Prime Minister Viktor Orban gestures during the celebrations of the 61st anniversary of the Hungarian Uprising of 1956, Budapest, Oct. 23.
by Compiled from Wire Services Oct 25, 2017 12:00 am

Hungarian Prime Minister Viktor Orban, an ardent opponent of immigration, said Europe needs to be "safe, fair, civic, Christian and free" and return to the grandeur he claims it possessed before becoming increasingly multicultural. He has often described Muslim migrants as invaders who threaten Europe's cultural identity.

Orban reiterated his criticism of the European Union's leadership and his belief that Europe's external borders must be protected. He also blamed a "speculative financial empire" for the "invasion" of migrants to Europe since 2015, an apparent reference to Hungarian-American billionaire George Soros. The prime minister made his remarks on the 61st anniversary of the Hungary's 1956 anti-Soviet uprising. Soviet tanks crushed the uprising within days and some 200,000 Hungarian refugees fled West.

That view has resonated in many places including Tusk's homeland, Poland, where he was previously prime minister.

The European Union must do more to defend its external borders against migrants, EU chief Donald Tusk said yesterday, describing Europe as a "cultural community" whose heritage must be preserved.

While the president of the European Council insisted that Europeans are not superior to other peoples, his rhetoric of cultural preservation echoed in some ways the language of populist politicians winning support across Europe with calls to keep migrants from settling on the continent.

"We are a cultural community, which doesn't mean that we are better or worse - we are simply different from the outside world," Tusk said in an address to the European Parliament in Strasbourg, France.

"Our openness and tolerance cannot mean walking away from protecting our heritage," Tusk added. "We have the right and obligation to care for what distinguishes us from other cultures - not in order to be against someone, but to be ourselves. Without a feeling of superiority, but with a feeling of justified pride."

Europe is deeply divided over the issue of migration, with leaders like German Chancellor Angela Merkel who initially called for relatively welcoming policies now retreating from those positions, and right-wing populists warning that large Muslim communities threaten to erode Europe's Christian profile.

Recent elections in Germany and Austria have reflected rising support for anti-migrant parties. Austria's newly elected leader Sebastian Kurz invited the far-right Freedom Party (FPOe) to begin coalition talks, in a fresh boost for European populists. The announcement by the incoming conservative chancellor paves the way for the FPOe's return to power nearly two decades after it last entered government in 2000. The last time the FPOe entered government Austria was ostracized in Europe. Its then leader Joerg Haider praised Hitler's "orderly" employment policies.

In Germany, the far-right Alternative for Germany (AfD) won 12.6 of the vote and entered parliament for the first time. Support for the AfD and its "take your country back" platform was particularly strong in eastern Germany, fueled by anger about Chancellor Angela Merkel's decision to open the country's doors to 1 million, mostly Muslim, migrants in 2015.