Far-right Wilders calls for dual citizens to be excluded from Dutch parliament, cabinet 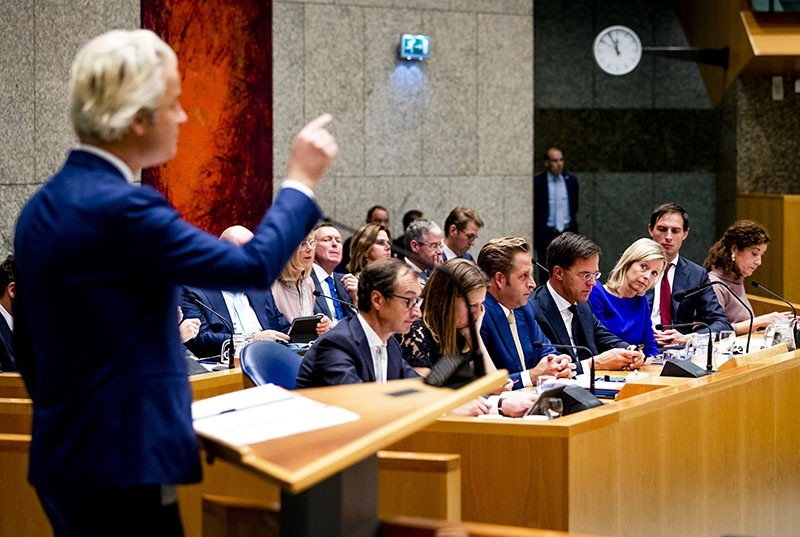 Dutch far-right leader Geert Wilders has added yet another racist and xenophobic remark to his record by calling for dual citizens to be excluded from parliament and the cabinet in the Netherlands.

Wilders' comments came at a parliament session during a debate on the program of Prime Minister Mark Rutte's newly established cabinet Wednesday morning.

As the leader of the main opposition anti-Islam and anti-migrant Party for Freedom (PVV), Wilders used this opportunity to launch his latest attack on minorities and migrants, which make up 20 percent of the population in the Netherlands – a country that once held colonies and trade posts in the entire world and now enjoys a vibrant economy in the European Union.

Kasja Ollongren, the new home affairs minister who holds dual Dutch and Swedish nationality, was the subject of a motion of no confidence by Wilders.

In his speech in parliament, Wilders was quick to bring the issue from Swedes to Turks and Moroccans.

"This is the Dutch Parliament. You have be Dutch here. I don't want Turks, Moroccans or Swedes in the parliament. Don't I have the right to say that? This is my country," Wilders said.

He argued that dual nationality brings up the issue of "dual loyalty" which he described as "shame."

The speech was met with heavy criticism in parliament.

Wilders and his party are also expected to target newly appointed justice minister Ferdinand Grapperhaus for his remarks advocating for foreign fighters with Dutch nationality that fought in the ranks of Daesh to be allowed back into the Netherlands as a more effective solution to the problem.

Jesse Klaver, the leader of the second largest opposition party GroenLinks (Green Left), was quick to react to the far-right leader's comments.

"Dutch is not in your blood but in your heart," said Klaver, who is of Moroccan background from his father's side while his mother has a mixed Dutch and Indonesian background.

Tunahan Kuzu, the leader of the Denk (Think) Party founded by the Turkish community of the country, said that it is not up to Wilders but the constitution of the country to decide who is Dutch and who is not.

"Dual citizenship means nothing about one's loyalty to the country. One's loyalty can only be measured by his/her actions," Kuzu said.

Kuzu reminded that Wilders should question his loyalty more than others since he was probed by the Dutch intelligence agency for spending more time at the Israeli embassy than his house.

The run-up of the elections held on March 15, 2017 saw the rise of populism and right-wing comments in the Netherlands, just like the rest of Europe which faced a massive influx of refugees and migrants over the course of the past two years. The election process also saw a heated diplomatic row with Turkey as its ministers were banned from holding referendum rallies for the Turkish community in the country.

The result was the rise of PVV and a more fragmented parliament, which caused Rutte to spend a record 255 days to form the government with the progressive Democracy 66 (D66), center-right Christian Democrats (CDA), and the smaller and more conservative Christian Union.