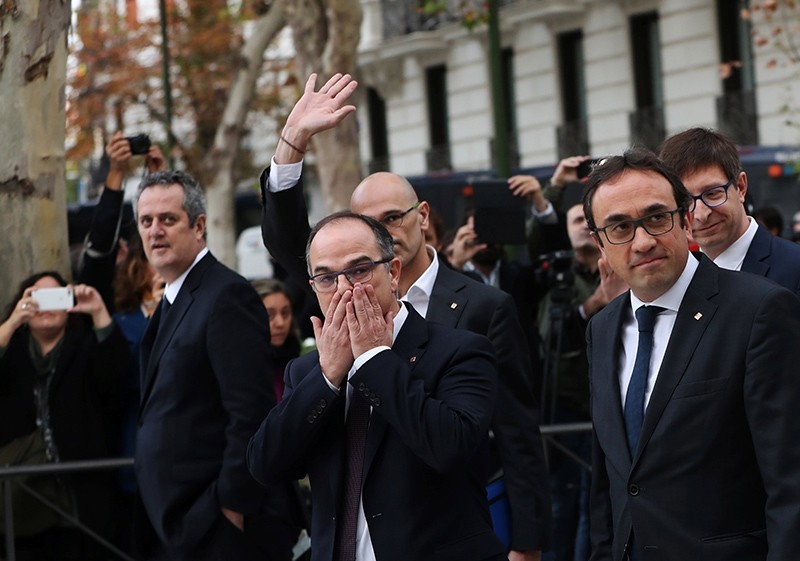 Sacked members of Catalan cabinet at Spain's High Court after being summoned to testify on charges of rebellion, Madrid, Spain, Nov. 2, 2017. (Reuters Photo)
by Associated Press
Nov 02, 2017 12:00 am

Spain's National Court in Madrid was questioning ousted Catalan government members Thursday in an investigation into possible rebellion charges for having declared the region's independence, while a parallel Supreme Court session for six Catalan lawmakers was postponed for a week.

Prosecutors called on the National Court to jail all nine former members of the Catalan government who appeared for questioning. The request was for unconditional jail for eight of the politicians, while bail could be set for the remaining one. It wasn't immediately clear how the judge would rule on the request.

Twenty regional politicians, including fired regional government president Carles Puigdemont, were called to appear after the chief prosecutor demanded they be charged with rebellion, sedition and embezzlement following the Catalan parliament's declaration of secession Oct. 27. The crimes are punishable by up to 30 years in prison under Spanish law.

But Puigdemont, who traveled to Belgium with some of his ex-Cabinet members, remained in Brussels along with four of his former ministers. Their failure to appear before the court could trigger arrest warrants and an extradition petition.

Puigdemont's No. 2, Catalan ex-vice president Oriol Junqueras, was the first to arrive at the National Court. He went in accompanied by lawyers, passing by dozens of journalists, and declined to answer questions. The National Court procedures began with the appearance of former Catalan regional government spokesman Jordi Turull, followed by Josep Rull, who had handled the region's territorial affairs.

But a corresponding session in the Supreme Court for six regional parliament members, including Catalan parliament speaker Carme Forcadell, one of the leading figures of the pro-independence movement in Catalonia for many years, was suspended until Nov. 9 following a request by the lawmakers' lawyers for more time to prepare their defense.

Supreme Court judge Pablo Llarena granted the lawyers' request, and ordered the lawmakers to ensure they are reachable by the police on their mobile phones until the hearing next week.

All six left the Supreme Court building in Madrid. Forcadell emerged first and got into a taxi, followed by the others who were welcomed by supporters clapping and chanting "Freedom, freedom." None answered any questions to waiting reporters.

Spain took the unprecedented step of triggering constitutional powers allowing it to take over the running of Catalonia following the region's declaration of independence. Madrid has sacked the regional Cabinet, dissolved the regional parliament and called a new regional election for Dec. 21.

Puigdemont said he and several of his former ministers went to Brussels earlier this week for "freedom and safety." Four of the ex-ministers remained in Brussels with him while the others returned and were to be appearing in court.

Javier Melero, lawyer for some of the separatist lawmakers investigated in the Supreme Court, criticized Puigdemont and other officials' decision to avoid the questioning. He said the move will be damaging for his clients, the three lawmakers who are also members of Puigdemont's PDeCAT party.

"Not being at the service of the judiciary when you are summoned is always damaging for the rest of those being investigated," Melero said.

About two dozen politicians and elected officials from Catalan separatist parties had gathered at the gates of the Supreme Court in a show of support for those appearing.

"If the question is if in Spain you can trust the judicial system, my answer is no," said Artur Mas, a former president of the Catalan government. "From the personal point of view and also for my personal experience, I don't think that there are all the guarantees to have a fair trial."

Earlier this year, Mas was banned by a Barcelona court from holding public office for two years after he ignored a Constitutional Court ruling and went ahead with a mock vote on Catalonia's independence in 2014.

Assumpcio Lailla, a former lawmaker with Catalonia's Democrats party, said she had traveled to Madrid joining around 100 other politicians and elected officials to show support to those investigated in the rebellion probe.

"This is an unjust situation in which they are being investigated for facilitating democracy," she said. "I don't understand how Europe can look away from democracy."

The supporters greeted some of the lawmakers who appeared at the Supreme Court cheering and shouting: "Freedom, Freedom" and "we are not afraid."

Across the street, half a dozen protesters with Spanish flags were stopped by police. They shouted at the Catalan politicians, "cowards" and "to jail, to jail."

In Barcelona, the Catalan regional capital, thousands of people rallied outside the regional presidential palace in Sant Jaume Square at noon to show their support for those appearing in court, clapping and chanting slogans in favor of independence.

The protracted political crisis over Catalonia, Spain's worst in decades, could have an impact on the country's economic growth, Spain's central bank warned in a technical report published Thursday.

The Bank of Spain had assessed the potential consequences of two possible scenarios: one is a temporary period of uncertainty in the fourth quarter of 2017 which could shave 0.3 percentage points off forecast growth through the end of 2019.

The other scenario was a "severe and prolonged" crisis, which would bring an accumulated decrease of 2.5 percentage points in Spain's gross domestic product between the end of 2017 and 2019. That, it said, could spell a recession for the Catalan economy.