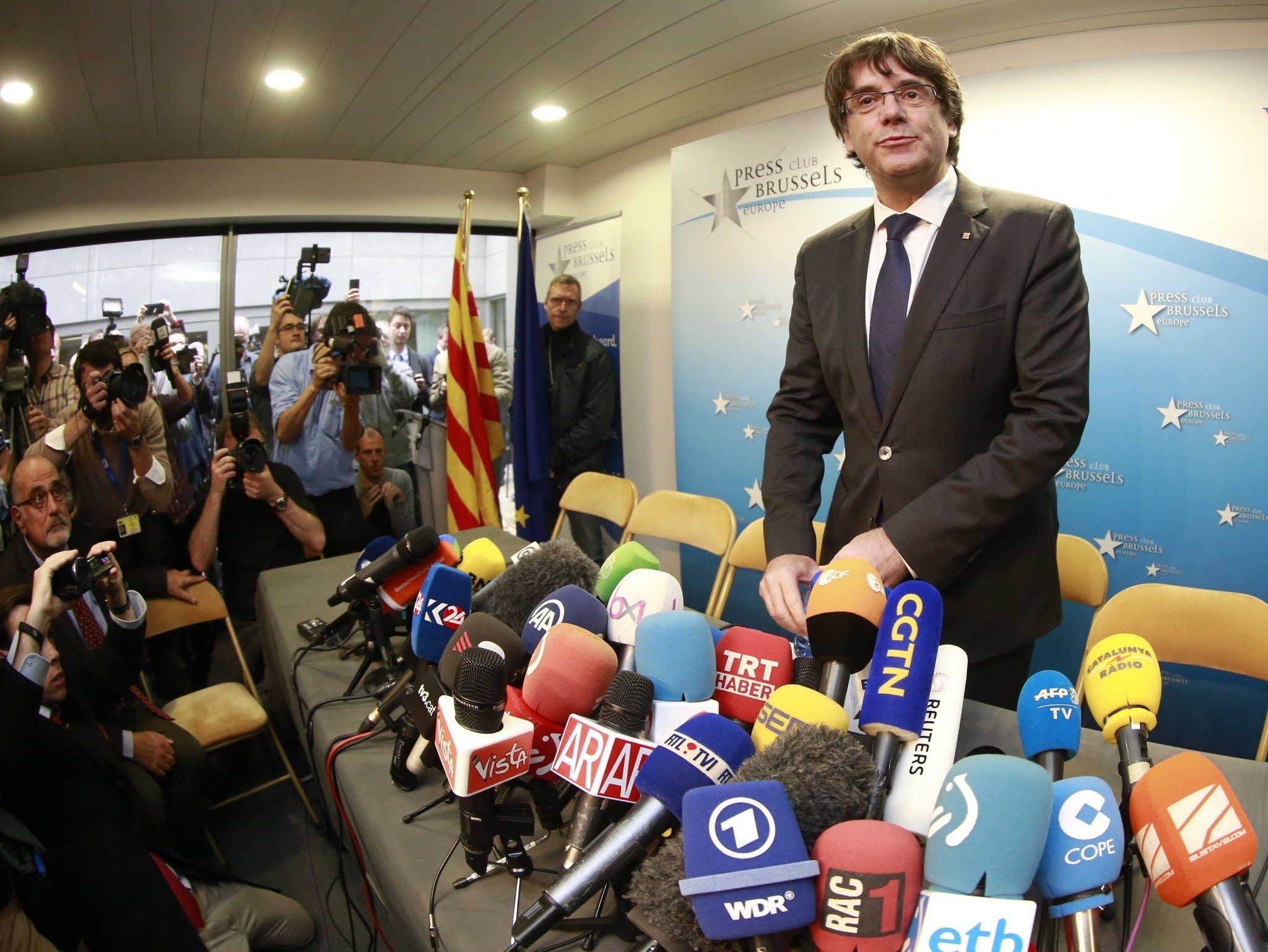 A Spanish judge issued an arrest warrant for ousted Catalan leader Carles Puigdemont and four of his former councillors, all currently in Belgium, the High Court said in a statement on Friday.

Puigdemont flew to Brussels this week after Spanish authorities removed him and his Cabinet from office for pushing the region's secession. The Spanish government also called an early election for Dec. 21.

Puigdemont and his associates faces charges of rebellion, sedition, misuse of public funds and breach of trust. The judge rejected the former Catalan leader's request to testify via videoconference from Belgium.

The ousted and absent leader of Spain's Catalonia region, while waiting to learn if a Spanish judge would issue an international warrant for his arrest, said Friday that he was prepared to run for his old job from Belgium, where he is in hiding.

Puigdemont told an Belgian broadcaster earlier on Friday that if an arrest warrant is issued, he will fight extradition to Spain without seeking political asylum, according to his Belgian lawyer.

Puigdemont said he wanted the December vote "to take place under the best possible conditions. It's not with a government in prison that these elections are going to be neutral, independent, normal."

He also said he was not in Belgium to "Belgianize Catalan politics."

"I did not flee, but it's impossible to properly prepare" a legal defense while in Spain, he said, adding that he had lost faith in the Spanish justice system.

Puigdemont now have to be brought before an investigating judge within 24 hours. His extradition procedure would take 15 days, Belgian legal experts say. But should Puigdemont appeal, that process could take a further 45 days, meaning that he would probably not leave Belgium before early January, well after the elections.

Like his nine former ministers who were jailed, Puigdemont was due to appear at Spain's National Court on Thursday to answer questions in a rebellion investigation. Spanish prosecutors want to charge members of the dismissed regional government —as well as six additional members of the regional parliament— for promoting official steps to declaring Catalonia's independence.

Meanwhile, a panel of National Court judges on Friday rejected an appeal seeking the release of two separatist activists who were jailed last month in a separate sedition investigation.

A National Court spokesman said that Assemblea Nacional Catalana president Jordi Sanchez and Omnium Cultural leader Jordi Cuixart will remain in a Madrid jail while the investigation continues. The spokesman spoke on condition of anonymity in line with court policy.

Sanchez and Cuixart are being investigated for allegedly orchestrating protests that hindered a judicial investigation to halt preparations for a banned independence referendum held on Oct. 1.

Under Spain's legal system, investigating judges can have suspects detained while a comprehensive probe, sometimes taking months, determines if they should be charged.

Spanish government spokesman Inigo Mendez de Vigo deflected questions by the media regarding the jailing of the Catalan officials. The separation of powers meant that the government's focus was on preparing for the early election it called for Catalonia, Mendez de Vigo said.

"What the government guarantees is that there will be elections where the parties which want to run can present their programs, and we hope that the election can end this period of uncertainty and the deterioration of harmonious coexistence in Catalonia," he said.

One of the nine jailed Catalan officials, ex-regional minister for business Santi Vila, posted bail of 50,000 euros (about $58,000) and was released from custody on Friday. His passport was confiscated and Vila needs to show up in court regularly as the rebellion, sedition and embezzlement probe continues.

The other eight were held without having bail set.

"I ask for all political parties across to Spain, appealing to their democratic values, to put an end to this terrible situation that has put politicians in prison," Vila said as he left the Estremera prison near Madrid.

Vila resigned in protest a day before Catalonia's parliament voted in favor of the independence declaration. He has said he wants to lead the center-right separatist Democratic Party of Catalonia in the upcoming election on a moderate platform.