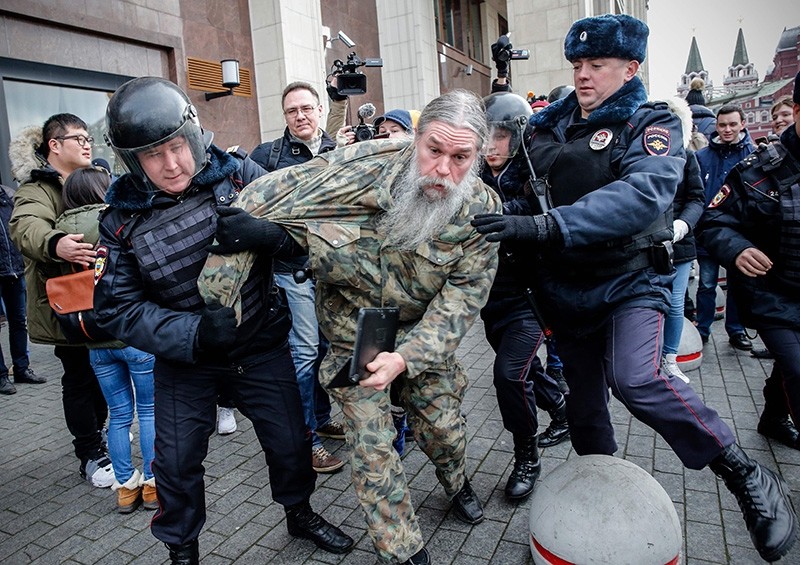 Russian riot police detain an opposition activist during a protest rally in central Moscow on November 5, 2017. (AFP Photo)
by Daily Sabah with AFP
Nov 05, 2017 12:00 am

According to OVD-Info, a rights group that monitors detentions at Russian political protests, 412 arrests were made overall, the vast majority in Moscow.

The demonstrations took place after radical opposition politician Vyacheslav Maltsev appealed on his website for supporters to hold protests across the country, calling for a "people's revolution" to end Putin's rule.

Many of those detained were carrying knives, knuckledusters and pistols that can fire rubber bullets, TASS state news agency reported.

Police, some in helmets and bullet-proof vests, reportedly picked up protesters one by one near the Kremlin in central Moscow.

A reporter for popular Echo of Moscow radio station, Andrei Yezhov, wrote on Twitter that he was detained, but later released without charge.

On Saturday, police detained dozens of nationalist activists in southern Moscow at an anti-Kremlin march on the public holiday known as the Day of National Unity.

Since Putin's return to the Kremlin in 2012, Russia has cracked down on nationalist leaders, many of whom are jailed or living in exile.