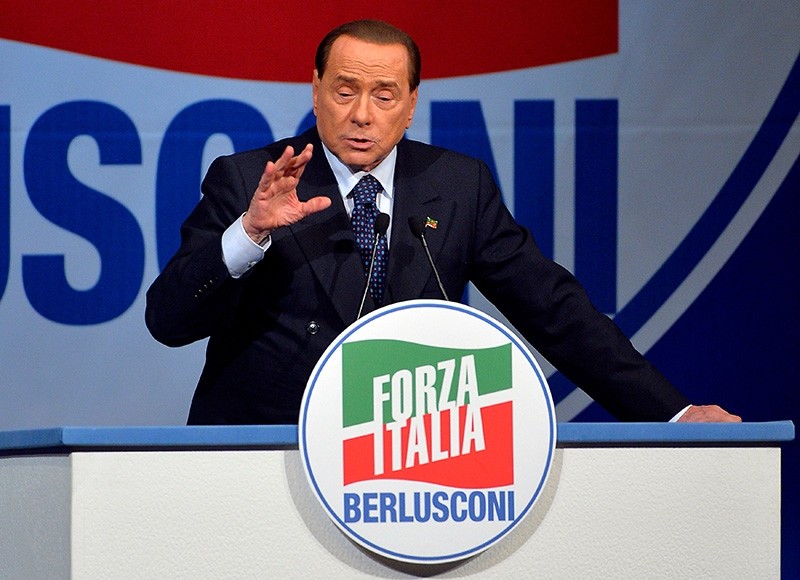 This file photo taken on May 22, 2014 shows Former Italian Prime Minister and president of the Italian center-right Forza Italia (FI) party, Silvio Berlusconi during a rally. (AFP Photo)
by Compiled from Wire Services Nov 06, 2017 12:00 am

An ally of former conservative premier Silvio Berlusconi was set for a slim victory Monday over the candidate of the populist Five Star Movement (M5S) in closely-watched elections in the southern Italian region of Sicily.

Sunday's vote, marked by a low turnout of 46.8 per cent, was seen as a trial run for general elections due early next year, possibly in March, and seemed to indicate that the opposition center-right and the M5S are currently best placed to win.

"Sicily chose, as I asked, the road of change, of a true, serious and constructive change based on honesty, competence and experience," Berlusconi said.

It was a bleak day for the country's ruling Democratic Party (PD) and its coalition partners. The PD candidate polled 18.5 percent and Prime Minister Paolo Gentiloni's center-left party lost control of the regional assembly.

With fewer than half of Sicily's 4.6 million eligible voters casting ballots Sunday in the last major electoral test before next year's parliamentary election, the result restored the island's traditional political order after five years of center-left administration.

But on a national scale, it indicated the validity of center-right coalition that aims to unseat the Democratic Party-led government next year, made up of Berlusconi's Forza Italia, the anti-migrant, anti-EU Northern League and right-wing Fratelli d'Italia.

5-Star Movement leader Luigi Di Maio said the result could propel the party to victory in the national election next year. So far, its biggest wins have been in Rome and Turin, both of which have been troubled administrations.

"A wave that will bring us to government is starting from Sicily," Di Maio said.

As things stand, the PD will enter the general election with former premier Matteo Renzi as its candidate to lead the country.

A centrist, Renzi is loathed by many on the left of his own party and in other factions. They accuse him of adopting right-wing policies in the guise of reforms aimed at bolstering Italy's flagging competitiveness.

Renzi also carries the baggage of his defeat in a 2015 referendum on constitutional reform that led to his resignation and replacement by current premier Paolo Gentiloni.

In contrast, Berlusconi is on the rise again and victory in Sicily will strengthen his hand as he prepares to tie down the terms of a general election alliance with the far-right Northern League.

"This marks the start of a wonderful new chapter for the united right," said Giovanni Toti, governor of the northern region of Liguria and a key lieutenant of the revitalized Berlusconi. Lombardy governor Roberto Maroni hailed the former premier as "immortal."

Famous for his 'Bunga Bunga' sex parties, penchant for plastic surgery and serial gaffes, Berlusconi had been written off as a spent political force after a series of scandals and open heart surgery last year.

He is barred from public office as a result of a conviction for tax fraud, but is hoping to have the ban lifted. Even if it is not, he will be a central figure in what promises to be a highly unpredictable election.

With the left struggling to overcome its divisions and M5S losing momentum, a Forza Italia-Northern League alliance looks well placed to emerge as the biggest force at the polls, which will be fought under a new electoral system favouring broad alliances.

M5S has denounced the electoral reform as rigged against it. The party, which styles itself as an anti-establishment force, has thus far ruled out entering into any alliance.

Di Maio had been due to debate Renzi on national television on Monday but pulled out as the disappointing Sicily results emerged.