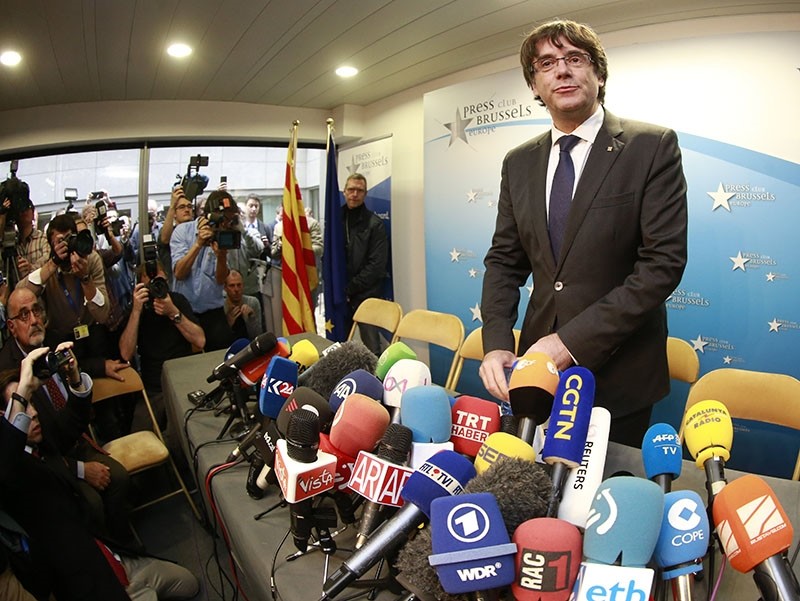 Ousted Catalan president Carles Puigdemont Monday contrasted his freedom in Belgium with the jailing of other Catalan nationalists in Spain, in his first online comment since being released from custody while he fights extradition to Spain for allegedly plotting a rebellion.

"Free and without bail," Puigdemont posted Monday on his Twitter account. He added, "Our thoughts are with the comrades unjustly jailed by a state that strays far from democratic practices."

Puigdemont and four of his associates turned themselves in to Belgian police early Sunday morning following Spain's issuing of an arrest warrant. A Brussels judge released all five late Sunday on condition they stay in Belgium and attend court sessions. Belgian authorities are meanwhile considering Spain's request to send him home.

The five fled to Belgium after Spanish authorities fired them on Oct. 28 for seeking secession for Catalonia.

Nine other deposed Cabinet members in that same rebellion case were sent to jail in Madrid, eight of them without bail, while the judge's investigation continues.

The leader of the biggest Belgian government party agreed with Puigdemont's sentiments on Spain's response, and especially that of its Popular Party conservative government, to the independence bid by Catalonia's political leaders.

"This is not a judicial conflict, it is a political conflict. You solve it with dialogue," N-VA leader Bart De Wever told VRT network Monday.

De Wever himself is not a member of the center-right government but he speaks for his party, which is the key in the four-party coalition of Prime Minister Charles Michel. De Wever has referred to Puigdemont as "a friend."