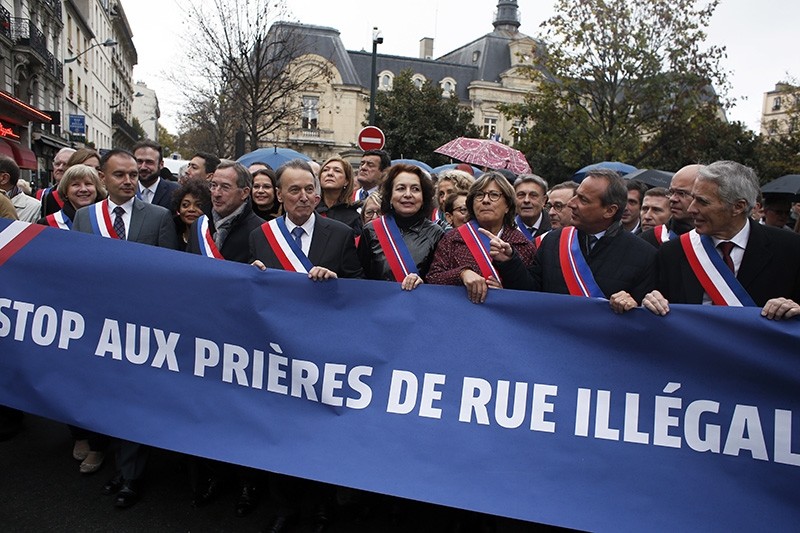 Around 100 local French lawmakers attempted to block Muslims praying in a street north of Paris on Friday and called on the government to ban what they see as an unacceptable use of public space.

The lawmakers, led by the head of the regional government of the Paris area, Valerie Pecresse, disrupted the crowd of around 200 all-male devotees and sang the national anthem in the multiethnic Clichy suburb.

"Public space cannot be taken over in this way," Pecresse said at the demonstration alongside the rightwing mayor of Clichy, Remi Muzeau, who like other lawmakers wore a sash in the national colors of blue, white and red.

Prayers in the street have taken place every Friday in Clichy since March to protest the closure of a popular local mosque that had operated in a government building.

The interior ministry "must ban street prayers," Muzeau told reporters at the scene on Friday. "I am responsible for guaranteeing the tranquility and freedom of everyone in my town."

The former mosque run by the Union of Clichy Muslim Associations (UAMC) was used by 3,000 to 5,000 Muslims daily before the mayor's office reclaimed the building and turned it into a library.

Muzeau says that local Muslims have been urged to use a new 1,500-square-meter (16,000 square feet) mosque nearby, but many are refusing to go there.

France has Europe's largest Muslim community, estimated at around five million, and concern about the religion challenging the country's strict secular laws was a major theme in this year's presidential election.

Muslim religious leaders complain that not enough space is made available for those wanting to attend services, but building new mosques remains controversial, with the influential far-right National Front (FN) particularly hostile.

In 2011, FN leader Marine Le Pen compared the sight of Muslims praying on the streets to the occupation of France by the Nazis in World War II, leading her to be prosecuted -- and acquitted -- for inciting hatred.

Abdelkader, a Clichy resident who was praying in the street on Friday, told AFP that he wanted a "dignified" place to worship, as Christians and Jews enjoy in France, and that said nobody liked being in the street surrounded by police every Friday.

He also resented the lawmakers singing the national anthem during their protest.

"They were singing the Marseillaise, throwing it in our faces, even though we're French people here. We're French. Long live France!" he said.