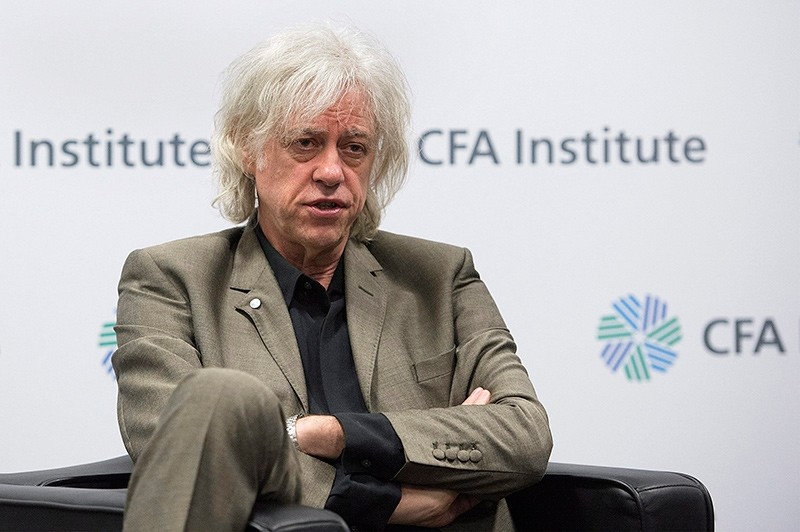 In this May 11, 2016, file photo, musician-activist Bob Geldof speaks to reporters following his speech at the CFA Institute annual conference in Montreal (AP Photo)
by Compiled from Wire Services Nov 13, 2017 12:00 am

Irish rock singer Bob Geldof says he is returning his Freedom of the City of Dublin honor because it is also held by Myanmar leader Aung San Suu Kyi, accusing her of complicity for what he and others, including the United Nations, call "ethnic cleansing" of Rohingya Muslims in the Asian nation.

The founder of Live Aid says Suu Kyi is a "handmaiden to genocide" whose association with Ireland's capital "shames us all."

Suu Kyi is a Nobel peace laureate for her leadership of the democracy movement in Myanmar but she has come under widespread criticism as her country's civilian leader because of violence that has caused many in the Rohingya minority to flee the country.

In a statement, Geldof says he will turn his award in at City Hall on Monday morning. He says he is a "proud Dubliner" and does not want the ceremonial title while Suu Kyi also holds it.

He says that "her association with our city shames us all and we should have no truck with it, even by default."

The U.N. has labeled the Rohingya one of the world's most persecuted religious minorities. Violence erupted in Myanmar's Rakhine state on Aug. 25 when the country's security forces launched an operation against the Rohingya Muslim community. It triggered a fresh influx of refugees towards neighboring Bangladesh, though the country sealed off its border to refugees. The region has seen simmering tension between its Buddhist and Muslim populations since communal violence broke out in 2012.

Suu Kyi was awarded the Dublin honor in 1999 for her work to bring democracy to Myanmar, but she didn't formally receive it until a visit in 2012, when she was also feted with a concert organized by Amnesty International.

In a speech this past September, Suu Kyi urged the international community to be patient over the crisis, and also suggested that the fleeing Rohingya were partly responsible.