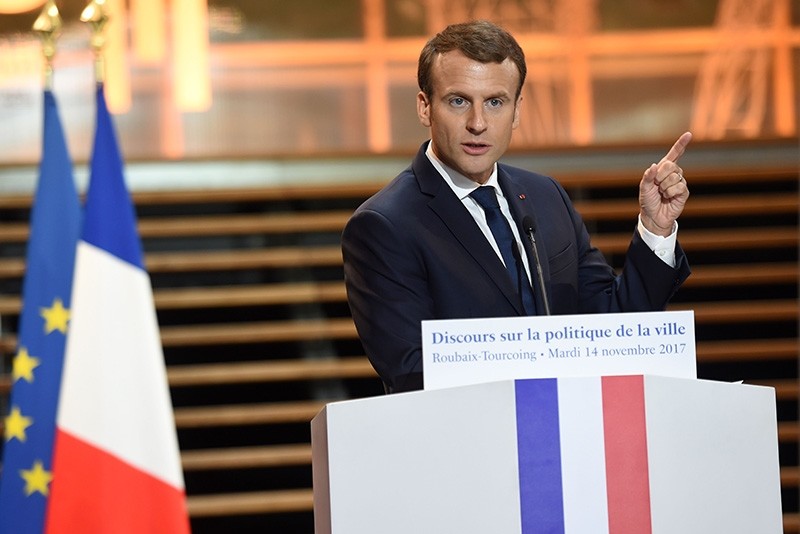 French President Emmanuel Macron delivers a speech during a visit to the Plaine Images industry hub in Tourcoing, northern France, on November 14, 2017, as part of his visit regarding city politics. (AFP Photo)
by German Press Agency - DPA
Nov 14, 2017 12:00 am

The members calling themselves the "100 Democrats" cited a lack of democracy in Macron's La Republique en Marche (The Republic on the Move, LREM) as their reason for the mass exit planned for Friday, one day before the party's first meeting is scheduled in Lyon.

Among other gripes, the members said no primary election for all party members was planned and votes for those members who don't hold office are handed out on a random basis, according to Franceinfo.

Franceinfo did not publish a list naming the 100 members, but it said the majority of them are rank-and-file members, community politicians and local party officials.

French government spokesman Christophe Castaner, a former Socialist Party lawmaker, is expected to be voted in as leader of the party on Saturday by a council. He did not face an opponent for the position.

Marcon founded LREM in early 2016, selling it as a political movement that broke away from traditional party structures and did not orient itself to either the right or left. It's now up to the party to establish itself after an energetic campaign and success in the presidential and parliamentary elections.