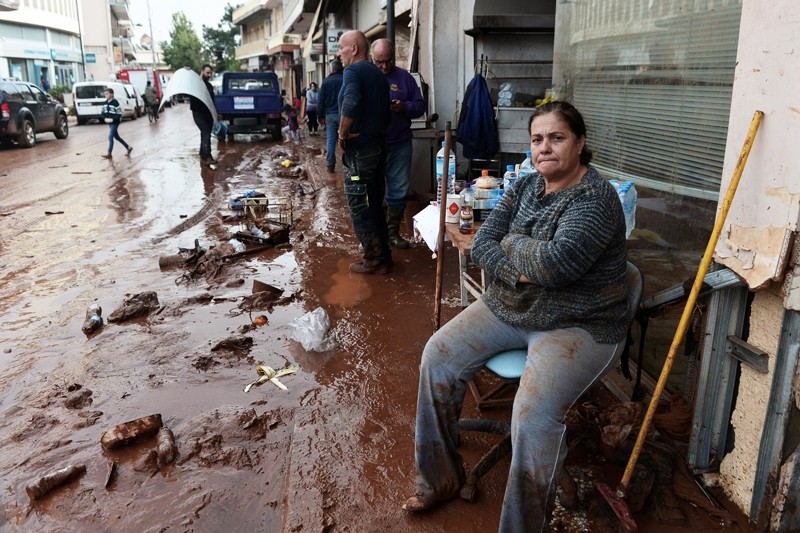 Six people were still missing in Greece Friday after a flash flood killed 19 others near the capital, with local communities facing food and medicine shortages and the full scope of the damage still unclear.

"We need rapid solutions... mainly on food distribution for those who have lost their homes, their documents, their medicine," said Ioanna Kriekouki, the mayor of Mandra, the town hardest hit by the inundation.

The freak flood struck early on Wednesday the towns of Mandra, Nea Peramos and Megara, some 50 kilometres (30 miles) west of Athens.

Some elderly people died inside or near their homes, drivers were trapped in their cars as they made their way to work, and two bodies were found at sea.

Local authorities have begun tallying the damage but with the emphasis still on clearing roads and searching for the missing, there is no clear indication of the cost.

The mayor of Mandra said some 2,000 homes and businesses had been gutted, and the Megara mayor said another 500 homes had been hit in his area. Even the local cemetery was submerged in mud, with tombstones broken and strewn about.

Over a hundred firefighters were in the area for a third day, clearing debris and racing against the clock to find people who could still be trapped under the mud.

"We are continuing to drain water (from properties) and to look for the missing, which is our priority," said fire department chief Constantinos Giovas.

Many parts of the area were without water and electricity. Hundreds of homes have been damaged and most local pharmacies have been forced shut.

"For the third day, there isn't a single open shop in Mandra. (And) we haven't washed since Wednesday," local shopowner Evangelos Peppas told AFP.

On Friday, the city of Athens said it had dispatched 2.5 tonnes of food, in addition to clothes, blankets and medicine.

Weather will remain poor in Greece through the weekend. Heavy rainfall on Friday flooded roads and homes in southwest Athens.

The Greek government on Wednesday declared three days of national mourning, and parliament on Friday observed a minute of silence in memory of the victims.

The missing include two hunters, one of them the brother of a man already confirmed dead. A family is also desperately searching for a truck driver whose vehicle was carried away in the flood.

At the height of the disaster, the deluge exceeded three metres (10 feet) in some areas, witnesses said. Three highways were flooded, submerging and carrying away even trailer trucks.

"This is clearly a rare and extreme weather phenomenon," Tsipras said in a statement.

"But this extreme phenomenon had these effects because of (decades of) accumulated problems and deficiencies in infrastructure and zone planning," he said.

Experts have said ill-conceived building in the area -- some of it by local municipal authorities -- meant this was a disaster waiting to happen.

Corrective drainage works for the area were approved in 2016 but work has yet to begin.

Late on Thursday, the capital was lashed by another thunderstorm and firefighters in northern Greece said they were called to drain water from over 400 homes.

In the northern region of Pieria, nearly 40 people had to be rescued by firefighters, authorities said.