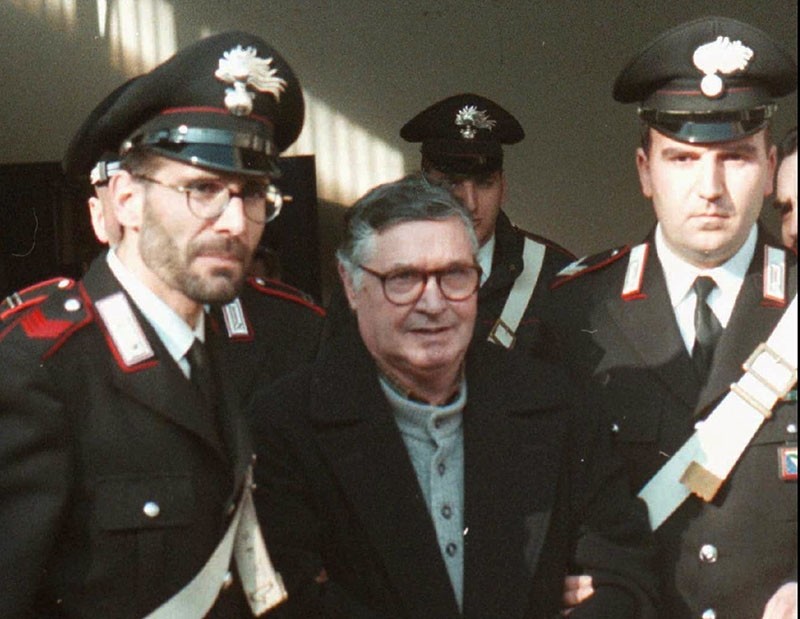 The former head of the Sicilian Mafia, Toto Riina, has died in a prison hospital in Italy, news agency ANSA is reporting.

Riina, who was serving several life sentences for murder, died at 3.37 (0237 GMT) in Parma, the northern city where he had been detained for years, ANSA said.

He turned 87 on Thursday, and according to media reports from the last 24 hours, he had recently entered into a coma after two operations.

The cause of death was not given, but Riina was suffering from kidney cancer and heart problems. In July courts turned down a request for his release from prison on health grounds.

He was one of the most violent and feared Godfathers in the history of the Sicilian Mafia.

Salvatore "Toto" Riina, nicknamed "The Beast" because of his cruelty, lead a reign of terror for almost 20 years after taking control of the island's powerful organized crime group Cosa Nostra in the 1970s.

The 87-year old had been serving 26 life sentences since 1993. He is thought to have ordered over 150 murders.

The most high-profile were the assassinations in 1992 of anti-mafia judges Giovanni Falcone and Paolo Borsellino, who had worked fearlessly to bring more than 300 mobsters to trial in 1987.

Riina, who was also dubbed "U Curtu" ("Shorty") due to his 5-foot-2-inch (1.58) height, for years denied all links to the crime group -- nicknamed "the octopus" for its tentacled reach into all areas of society.

In 2009 he broke the Mafia code of 'omerta' -- a vow of silence -- and surprised those who thought he would take his secrets to the grave by admitting his link to the mob.

He was caught on a wiretap earlier this year saying he "regrets nothing."

The son of a poor farmer, Riina was born on Nov. 16, 1930 in Corleone, a vendetta-haunted village inland from Palermo and the birthplace of Don Corleone, the fictional Godfather in Francis Coppola's popular movie trilogy.

He is believed to have first murdered for the Mafia aged 19 and followed that a year later by killing a man during an argument -- landing him behind bars for a six-year manslaughter stretch.

Once out, he became a foot soldier for volatile and vain boss Luciano Leggio, eventually taking over from him at the end of the 1970s when the cigar-puffing fugitive was caught and jailed.

Riina went on the run himself in 1969, but continued to lead the Corleonesi clan from hiding, increasing his influence by bumping off rivals such as Filippo Marchese, a hitman who garroted his victims in a "room of death."

Riina would elude police efforts to snare him for almost a quarter of a century -- without ever leaving Sicily -- and took charge of Cosa Nostra's key businesses, from drug trafficking to kidnapping and racketeering.

His bloody victory in the Mafia War of the 1980s was to prove his undoing however, as mobsters from defeated rival families began turning state witness against him, and police tracked him to a house in Palermo.

But the violence did not end there: from behind bars Riina ordered the murder of a 13-year old boy who was kidnapped in a bid to stop his father from spilling Mafia secrets. He was strangled and his body dissolved in acid.

In revenge for Riina's arrest and a new anti-Mafia law that saw jailed mobsters kept in total isolation, the group launched a series of bombings in Rome, Milan and Florence that killed 10 people.

After years in which only his lawyers were allowed to visit him, an ageing and cancer-riddled Riina asked in July 2017 to be released from prison on the grounds of serious illness -- a request that was denied.

On Thursday, days after he was placed into a medical coma by prison doctors, Italy's Health Minister Andrea Orlando signed a waiver allowing Riina's family to visit him and say their goodbyes.

The mobster was married to Antonietta Bagarella, a teacher from a mafioso family. He was father to four children, one of whom is behind bars for four murders.

"You're not Toto Riina to me, you're just my dad. And I wish you happy birthday dad on this sad but important day, I love you," one son, Salvo, wrote on Facebook on Thursday.