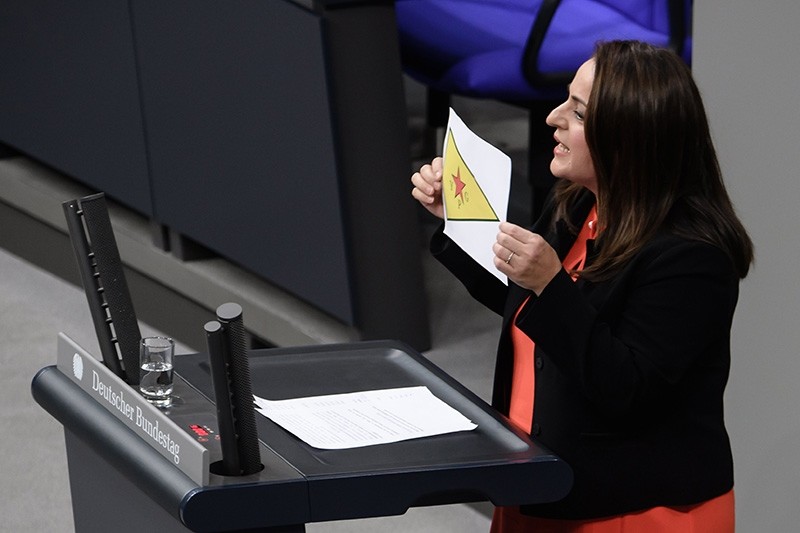 The Bundestag was discussing a possible extension of Germany's soldier deployment against the Daesh terror group in Syria.

Dağdelen called the ban on YPG flags "disgraceful," claiming that the PKK offshoot was fighting against Daesh just like German soldiers were in Syria.

The Left Party politician was interrupted by Christian Democratic Union (CDU) politician and Bundestag President Wolfgang Schäuble, who said her move was "unparliamentary."

She claimed that Gabriel was acting "hypocritical," and called him a "bailiff" of President Recep Tayyip Erdoğan.

Gabriel, on the other hand, dismissed Dağdelen's accusation that the German government was under Erdoğan's pressure.

"No one bans an organization in this country because someone from abroad demands it from us," he said.

The German ban on YPG flags is justified by the fact that it is close to the likewise banned PKK. The PKK is listed as a terror organization not just by Turkey but also by the European Union and the United States.

However, it has long enjoyed relative freedom in European cities and has a particularly strong presence in Germany with PKK supporters being allowed to hold rallies, recruit militants, and collect funds.

Sevim Dağdelen, a lawmaker of Turkish and Kurdish origin from the Left Party, has been a member of the German Bundestag since 2005.