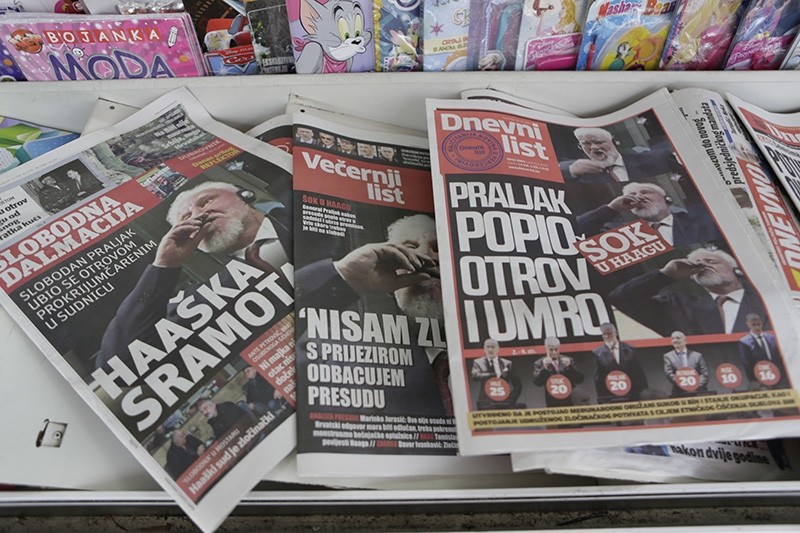 A former Croatian general who died after swallowing a liquid at a war crimes hearing in the Netherlands had cyanide in his system, Dutch prosecutors said after an autopsy was performed Friday.

Preliminary results from a toxicological test revealed "a concentration of potassium cyanide" in Slobodan Praljak's blood, the Hague Public Prosecutor's Office said in a statement.

The cyanide caused heart failure, which investigators "pointed out" as the 72-year-old Praljak's "suspected cause of death," according to the prosecutor's statement.

On Wednesday, Praljak drank from a small bottle that he said contained poison seconds after an appeals judge at the U.N.'s International Criminal Tribunal for the former Yugoslavia confirmed his 20-year sentence for crimes during the 1992-95 Bosnian war.

He was pronounced dead at a nearby hospital a little while later.

Meanwhile, the United Nations tribunal ordered an independent review of its "internal operations" following the dramatic event in its courtroom. The tribunal said its review was meant to complement the ongoing investigation of Praljak's death by Dutch prosecutors.

The announcement came after Croatia's justice minister raised doubts about whether security and medical staff at the tribunal responded quickly enough when Praljak raised the bottle to his lips with a trembling right hand and consumed its contents.

Before the toxicological test results came back, Dutch prosecutors had confirmed the bottle carried a toxic chemical. It remains unclear how Praljak, who was in custody before the hearing, obtained the substance and managed to smuggle it into the courtroom.

Cyanide is a fast-acting chemical that can be deadly in different forms. Cyanide gas is considered the most harmful, but swallowing cyanide can also be lethal.

Potassium cyanide, found in Praljak's blood, is a white powder that can have a bitter, almond-like odor. Cyanide kills by preventing the cells of the body from using oxygen, and is particularly harmful to the heart and brain, according to the U.S. Centers for Disease Control and Prevention.

The tribunal's review will begin next week and be led by Hassan Jallow, a former prosecutor with the U.N.'s Rwanda war crimes tribunal. It aims to file a report by Dec. 31, when the tribunal formally closes its doors, having completed all its cases.

The court says Jallow "is mandated to undertake an assessment of relevant existing procedures as well as make any recommendations which may assist other courts in the future."

Tribunal spokesman Nenad Golcevski said it is not the first time such a probe has been ordered by the court.

"Similar internal reviews have been initiated, for example, after the death of Slobodan Milosevic," Golcevski said, referring to the former Yugoslav president who died in his tribunal cell in 2006 before judges could deliver verdicts in his trial.

Two Croatian experts observed the autopsy on Praljak's body at the tribunal's request.

Bosnjakovic told Croatia's state TV that "much remains unclear, including how the poison was taken in, why security didn't react in time and why medical help arrived so late." He added that Croatia wants "all facts cleared about this tragic event."

Praljak's defense lawyer, Nika Pinter, told Croatia's Nova TV she did not know how Praljak managed to get the bottle past security.

"But that was his decision, his decision," Pinter said. "He would not want to live for one day with handcuffs on his hands, and (the) stigma of war criminal on his back."