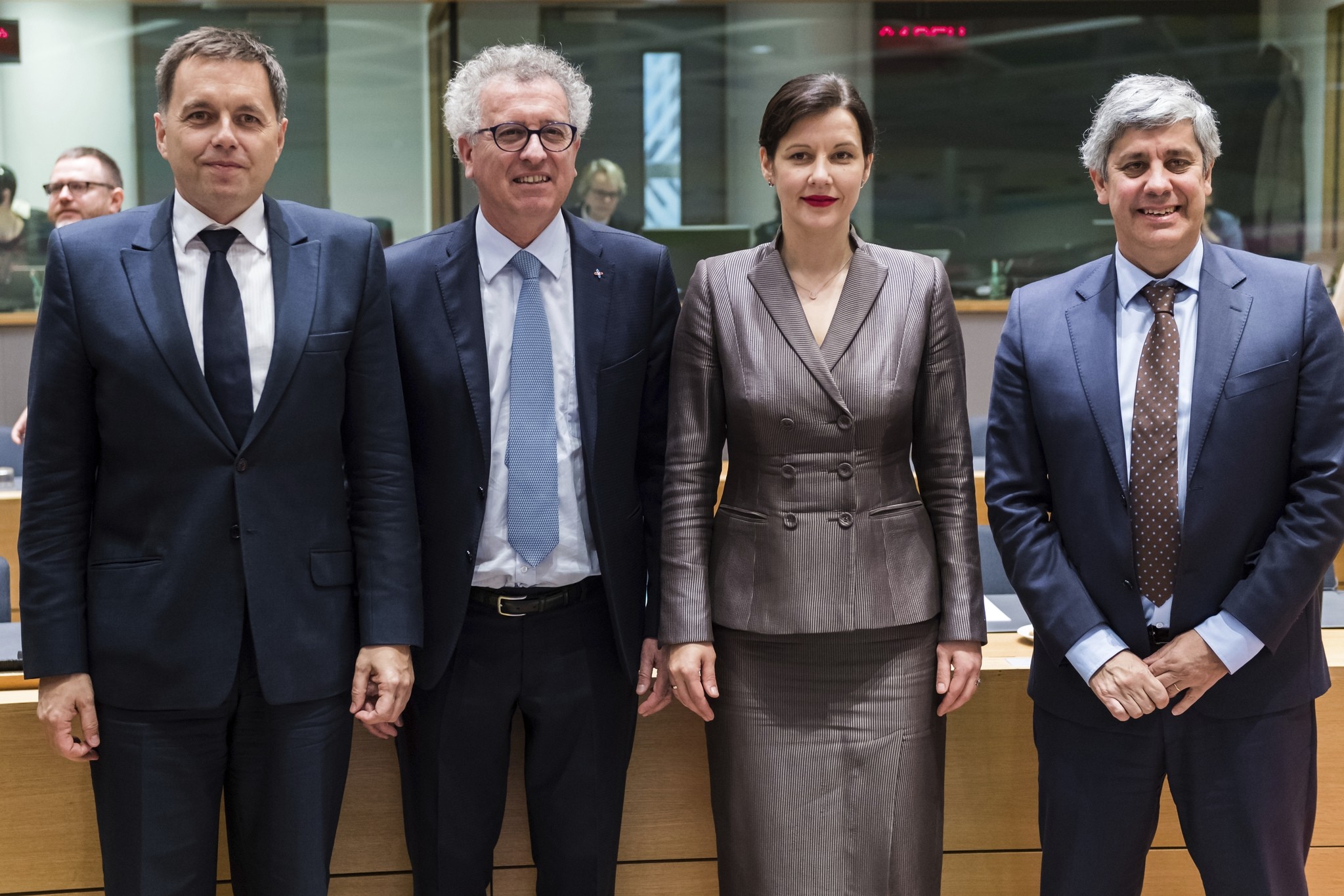 Portuguese Finance Minister Mario Centeno (4-R), one of the four candidates for the Presidency of the Eurogroup, waits for the start of an Eurogroup meeting in Brussels, December 4, 2017. (AP Photo)
by Associated Press Dec 04, 2017 12:00 am

Portuguese Finance Minister Mario Centeno has won the race to be the top official in the 19-country eurozone, a move away from the austerity mantra that has marked the recent crisis-ridden years in the single currency bloc.

Centeno, the overwhelming favorite, came out on top after two rounds of voting among his peers and will officially succeed Dutchman Jeroen Dijsselbloem on Jan. 13. His term as eurogroup president will last for two and a half years.

"It's an honor because of the relevance of this group, of the quality of all my colleagues, of the importance of the job we have to carry over the coming couple of years," he said after his victory over Luxembourg's Pierre Gramegna, Slovakia's Peter Kazimir and Latvia's Dana Reizniece-Ozola.

"We have a very unique time window to further prepare our economies and our society better."

Centeno will take the helm at an opportune time. Whereas Dijsselbloem's five years in the post were marked by crises largely centered on cash-strapped Greece, Centeno's tenure starts off in relatively benign conditions. The eurozone economy is growing strongly, while worries over Greece's future in the bloc have subsided with the country poised to exit its bailout era next summer.

Centeno's victory has the potential to symbolize a new era for the eurozone, all the more so as he comes from less-wealthy southern Europe. While eurozone governments still insist that countries must keep their public finances in shape, there's a greater acknowledgement that the austerity of the past few years has taken a heavy toll on people, particularly in countries like Portugal and Greece.

"We are confident this will represent a turning point for the future development of the eurozone and for the whole of Europe," said Gianni Pittella, leader of the S&D Group in the European Parliament. "We are finally overcoming the era of blind and stupid austerity that has left behind even more poor and divided societies across Europe."

Portugal was one of four eurozone countries that had to be bailed out during the region's debt crisis. In 2011, the country required a 78-billion-euro ($93 billion) rescue after its budget deficit grew too large and bond market investors asked for hefty premiums to lend to the government. In return for the financial lifeline, Portuguese governments had to enact a series of spending cuts and economic reforms. Portugal exited its bailout program in 2014.

Though the strategy may have worked in bringing Portugal's public finances into better shape, austerity accentuated a deep recession and sharply raised unemployment. Following a backlash against austerity, the Socialist Party came to power in December 2015, with Centeno, a former Bank of Portugal analyst, taking the post of finance minister.

Centeno, who has eased up on austerity in Portugal, said his aim would be to "generate consensus" in the "challenging" period ahead.

The key over the coming years is how to make the eurozone more viable in the long-run. The debt crisis of the past few years exposed the failings of the euro's architecture. Though a series of reforms, such as stricter controls on budgets, have made the eurozone more viable, there is a widespread belief that more needs to be done to make sure there's no repeat of the recent debt crisis. Achieving a consensus on how to do that is likely to be a key part of Centeno's work.

Achieving consensus isn't always easy given that the governments of the eurozone come from a variety of political traditions with differing mandates and economic agendas.

Dijsselbloem, whose Labor Party fared poorly in Dutch elections this year and is no longer part of the coalition government, was considered a skilled operator in bridging differences and maintaining a consensus, particularly over austerity. That was especially the case during the Greek crisis of 2015, which saw the country nearly crash out of the euro before the newly elected left-led government in Athens agreed to a last-minute international bailout.

Dijsselbloem's advice to his successor was to keep the eurogroup "together and united."