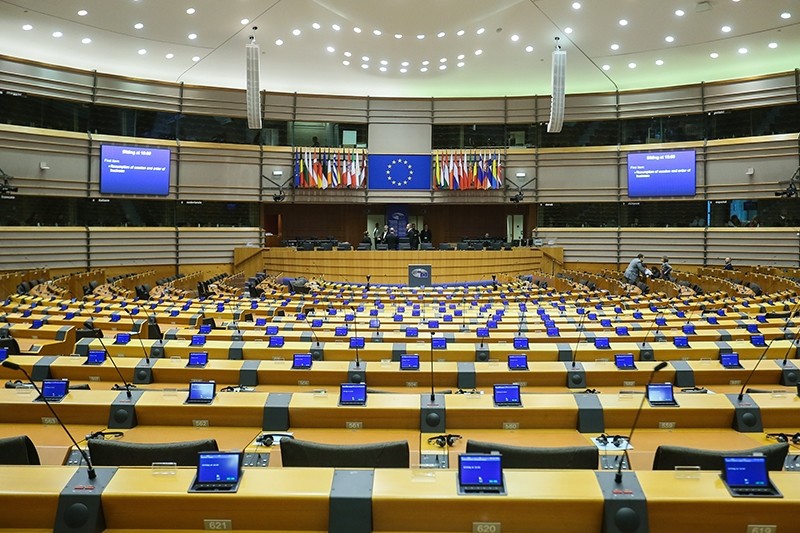 A view of the hemicycle ahead of a plenary session at the European Parliament in Brussels, Belgium (EPA Photo)
by Associated Press Dec 06, 2017 12:00 am

Prosecutors didn't identify which country Bela Kovacs was purportedly spying for, but earlier said that Hungary's counterintelligence service had been alarmed by his regular contacts with Russian diplomats and monthly visits to Moscow.

According to the indictment, "the parliamentary representative carried out his spying activities in the interests of a foreign state and on behalf of the secret services," prosecutors said.

Charges filed by the Chief Investigative Prosecutor's Office against Kovacs, from the far-right Jobbik party, also include fraud totaling 21,076 euros ($24,900) stemming from the fictitious employment of interns in the EU parliament in 2012 to 2013.

Kovacs, who has been a member of the EU parliament since 2010, worked and studied in Russia for many years.

The case first came to light in mid-2014, when prosecutors asked the European Parliament to lift Kovacs' immunity, though at the time the reason was classified. The request was approved in October 2015, when a separate request was filed to lift his immunity in the fraud case.

Kovacs denied the charges, saying he welcomed the opportunity to clear his name in court. He said he was immediately leaving his party.

In a post on his official Facebook page, Kovacs said that Prime Minister Viktor Orban's governing party, Fidesz, was using his case to target the Jobbik party.

"I don't want the unfounded charges against my person and the court proceedings to make Jobbik's 2018 electoral victory more difficult," he wrote.

The Jobbik party said in a statement: "It was long clear to us ... that Fidesz was trying to weaken us, the government-changing force."

According to the latest polls, Jobbik is the strongest opposition group, although Orban's Fidesz party has a commanding lead and may win another two-thirds majority in April's parliamentary elections.

Jobbik had been supportive of Russia's annexation of Crimea and efforts by pro-Russia separatists in eastern Ukraine to gain independence. It is also known for its anti-EU positions as well as for frequent racist and anti-Semitic statements by its members and supporters.

Prosecutors said three others were indicted in the fraud case.