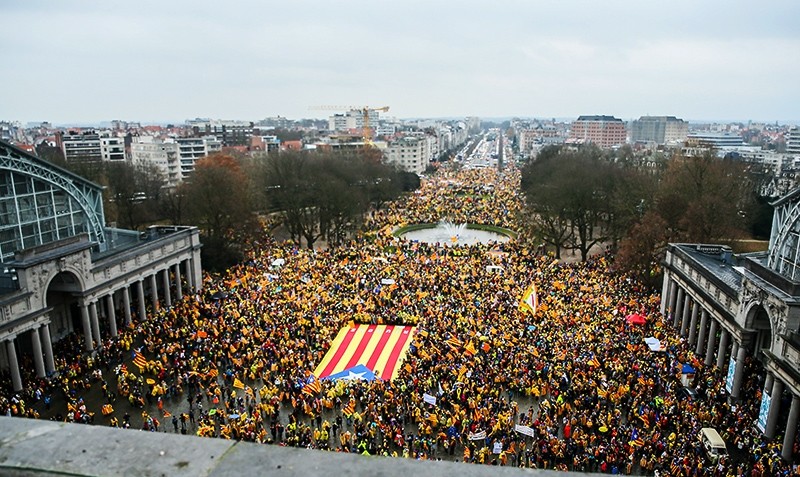 Tens of thousands of people from Catalonia are rallying in Brussels to complain about what they see as the European Union's failure to help them following a failed independence referendum in the Spanish region.

Brussels police said Thursday that around 45,000 people attended the rally, which comes just two weeks ahead of regional elections in Catalonia.

Singing and chanting slogans, the throng marched around the EU's main institutions, some draped in flags or carrying signs with "Shame on You" stamped over an EU flag.

Some carried placards criticizing the EU for not pressuring Madrid. One sign showed the face of European Commission President Jean-Claude Juncker with the question: "Democracy? Some defend it when it suits them. Shame on them."

Gloria Cot, a clerk from Barcelona who had just arrived in by coach, said: "Brussels is a kind of a loudspeaker for us.

"It is a loudspeaker so that people can know that we really don't have a 100 percent democracy in Spain and that Catalonia has always been subjected to problems with Spain."

Nuria Salvat, a student from Tarragona in Catalonia, said she had come to demand freedom for "political prisoners" — members of Puigdemont's administration held in jail in Spain — and to support Puigdemont himself, who faces jail if he returns.

"Spain," she said, "has always treated us very badly."

Former Catalan leader, Carles Puigdemont, who like many in the crowd wore yellow in support of jailed separatist leaders, addressed the crowd in Catalan before switching to French to direct a message to Juncker.

"Is there any place in the world that holds demonstrations like this to support criminals?" he said.

Spain's Supreme Court on Tuesday withdrew an international arrest warrant for Puigdemont in order to bring his case back solely under Spanish jurisdiction, leaving him without an international legal stage to pursue his independence campaign.

Puigdemont and four of his cabinet members fled to Belgium when Madrid imposed direct rule on Catalonia and sacked his government after an Oct. 27 declaration of independence by his local government.

He is likely to be detained if he returns to Spain, pending investigation on charges of sedition, rebellion, misuse of public funds, disobedience and breach of trust.

Puigdemont said on Wednesday he would remain in Belgium for the time being.

Juncker's deputy Frans Timmermans said he welcomed the "very positive atmosphere" of the demonstration, which took place as campaigning gets under way for a Catalan election on Dec. 21.

Spanish Prime Minister Mariano Rajoy hopes pro-independence parties will lose their majority in the Catalan parliament in the election and end the deadlock created by his government's refusal to recognise a banned independence vote Puigdemont held in September.

Many Catalans are pro-European, yet feel let down by the bloc's failure to mediate their conflict with Madrid.

The EU, meanwhile, has strongly backed the Spanish government over the Catalan issue, saying that it is an internal matter for Madrid.