One dead, 18 injured after explosion at Austria's largest gas hub 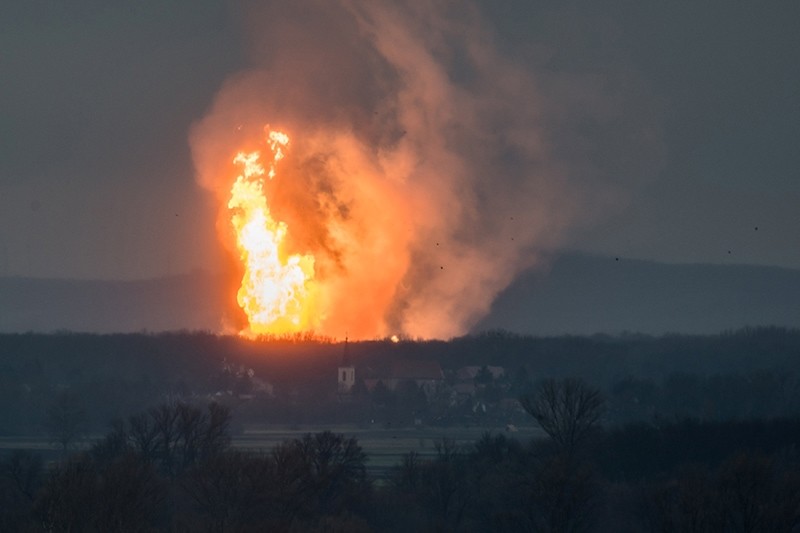 In this picture obtained from social media, a column of fire is seen after an explosion ripped through Austria's main gas pipeline hub in Baumgarten, Austria, Dec. 12, 2017. (Tomas Hulik via Reuters)
by Compiled from Wire Services Dec 12, 2017 12:00 am

An explosion on Tuesday at a natural gas facility near Austria's border with Slovakia left one person dead, authorities said.

A further 18 people were injured in the morning blast at the plant in Baumgarten an der March, east of Vienna, regional Red Cross official Sonja Kellner said. Two medical helicopters were sent to the scene, the Austria Press Agency reported.

The explosion set off a fire, which operator Gas Connect said was contained by midmorning. The facility was shut down, Gas Connect spokesman Armin Teichert said.

Police wrote on Twitter that the situation "is under control."

The site had been evacuated and that the facility had been put into "security mode," Armin Teichert, a spokesman for the site's operator Gas Connect Austria, said, adding that the material damage was "major."

Police said on social media that people should avoid the area.

Media reports said that more than 200 fire fighters from several brigades in the surrounding area were called in to help, as well as a number of air ambulances.

Police added that the cause of the incident was a "technical" one and the local authorities had begun an investigation.

The Baumgarten gas hub is Austria's largest reception point and the main distribution hub for natural gas imports from Russia, Norway and other countries.

Located near Austria's eastern border with Slovakia, it is also one of Europe's most important gas hubs, handling some 40 billion cubic meters per year.

Later Tuesday, Italy declared a "state of emergency" on gas supplies in response to the explosion.

"Following European regulation and the National emergency plan, the Ministry has [...] declared the state of emergency," the Economic Development Ministry said on its website.

The ministry stressed, however, that Italy faced no immediate energy crisis as it has enough gas reserves.