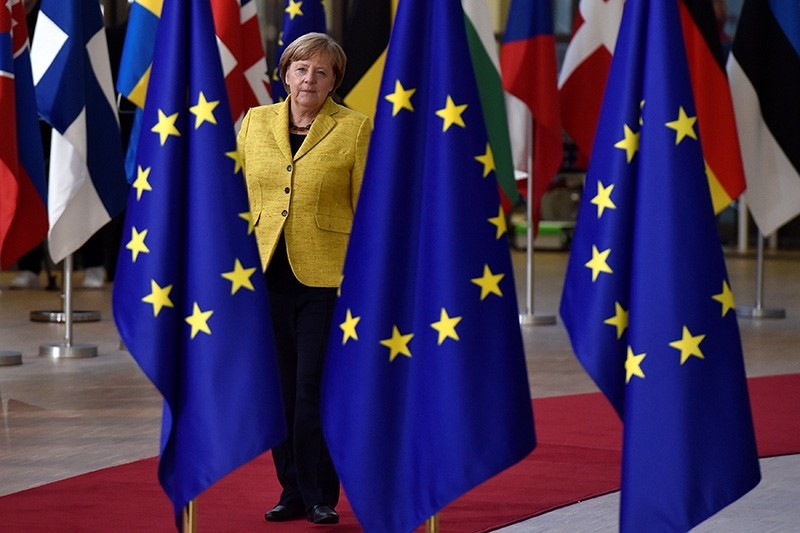 EU leaders headed for a new east-west clash at a Brussels summit Thursday over how to deal with large numbers of migrants coming to Europe.

European Council President Donald Tusk irked some nations when he said in a pre-summit letter that a mandatory quota scheme for relocating refugees from frontline states was "ineffective" and "highly divisive."

Eastern European states including Poland, Hungary and the Czech Republic have backed his approach, but Germany and others say the quotas are a necessary way of showing solidarity in the EU.

Merkel's 2015 decision to open the doors to one million asylum seekers was blamed by many European leaders for worsening the migration crisis.

Tusk, who is launching on Friday what he hopes will be a debate among leaders on how to reform the EU's asylum rules, admitted that disunity on migration was "very visible."

"These divisions are accompanied by emotions which make it hard to find even a common language and rational argument for this debate," the former Polish premier said.

The quotas triggered sharp east-west division when they were adopted at the height of the migrant crisis in 2015 as a way to ease the burden on Italy and Greece, which had more than 1.5 million people land on their shores in the last three years.

The EU has since stalled on plans for a permanent mechanism for future crises, and the leaders of Poland, Hungary, the Czech Republic and Slovakia made clear Thursday their continuing opposition.

'Quotas do not work'

"We absolutely reject the idea of quotas, because we believe that quotas do not work," Slovak Prime Minister Robert Fico told reporters after meeting European Commission chief Jean-Claude Juncker and Italian premier Paolo Gentiloni on the subject.

The four eastern leaders -- three of whose countries face legal action for refusing to take in any refugees under the quota system -- promised 35 million euros ($30 million) for the multi-billion euro Africa Trust Fund to help strengthen the EU's external borders as well as Libya's frontiers.

Gentiloni welcomed the support but maintained his stance, saying: "These differences for sure do not change with this decision."

French President Emmanuel Macron welcomed the "good will" in the financial contribution from the four eastern EU states but said "it resolves nothing".

Italy and Greece have seen sharp declines in migrant arrivals in the last months and year as a result of EU cooperation with Turkey and Libya, but fear future crisis.

Tusk's comments also caused a row with the European Commission, the executive arm of the EU, which first pushed the quota system.

EU officials said over 32,000 people had been relocated under the plan, or 90 percent of those eligible. The scheme was originally meant to relocate 160,000 refugees.

"We can expect a very lively and maybe controversial debate," one EU diplomat said on condition of anonymity.