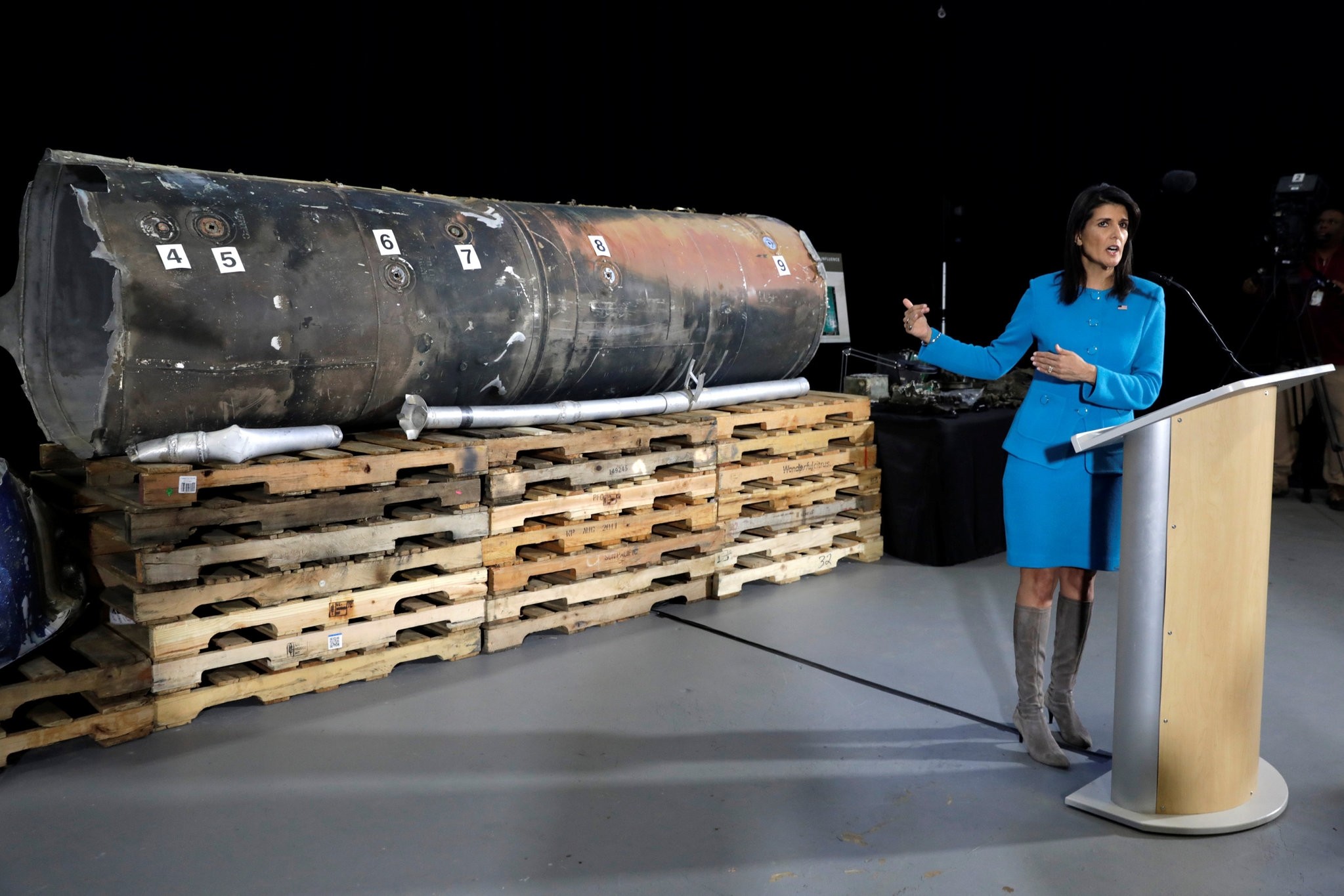 U.S. Ambassador to the United Nations Nikki Haley briefs the media in front of remains of Iranian ,Qiam, ballistic missile provided by Pentagon at Joint Base Anacostia-Bolling in Washington, U.S., December 14, 2017. (REUTERS Photo)
by Dec 14, 2017 12:00 am

Iran on Thursday dismissed evidence presented by U.S. Ambassador Nikki Haley that it had supplied Yemen's Houthi rebels with a missile fired at Saudi Arabia as "fabricated," saying the accusations were baseless.

"This purportedly evidence, put on public display today, is as much fabricated as the one presented on some other occasions earlier," said Alireza Miryousefi, spokesman at Iran's mission to the United Nations.

Haley told a news conference in Washington that a missile fired on November 4 by the Houthi rebels that was intercepted near Riyadh airport was Iranian-made.

"It was made in Iran then sent to Houthi militants in Yemen," Haley said.

"From there it was fired at a civilian airport with the potential to kill hundreds of innocent civilians in Saudi Arabia."

Iran "categorically" rejects the accusation "as unfounded and, at the same time, irresponsible, provocative and destructive," Miryousefi said in a statement.

"The US government has an agenda and is constantly at work to deceive the public into believing the cases they put together to advance it," he added.

The Iranian mission said the accusations leveled by Haley were intended to divert attention from the devastating war in Yemen being led by Saudi Arabia, a key US ally.

"These hyperboles" serve the US agenda in the Middle East including the administration's "unbridled support for the Israeli regime," said the spokesman.

A confidential report to the council this month said UN officials had examined debris from missiles fired at Saudi Arabia which pointed to a "common origin" but there was no firm conclusion on whether they came from an Iranian supplier.

The report from UN Secretary-General Antonio Guterres, which was obtained by AFP, said the officials were still analyzing the information.

A separate team of UN experts who inspected the missile fragments during a visit to Riyadh last month found a possible link to an Iranian manufacturer, the Shahid Bagheri Industrial Group, which is on the UN sanctions blacklist.

The experts, who report to the sanctions committee, found a component marked by a logo similar to that of the banned group, which is a subsidiary of the Iranian Aerospace Industries Organization.

Haley has called on the UN Security Council to take a tougher stance toward Iran, accusing Tehran of making illegal arms deals in Yemen, Lebanon and Syria.

The Saudi-led coalition fighting the rebels in Yemen imposed a blockade of Yemen's air and sea ports and borders after the missile was fired at Riyadh, citing concerns that weapons were being smuggled into Yemen.