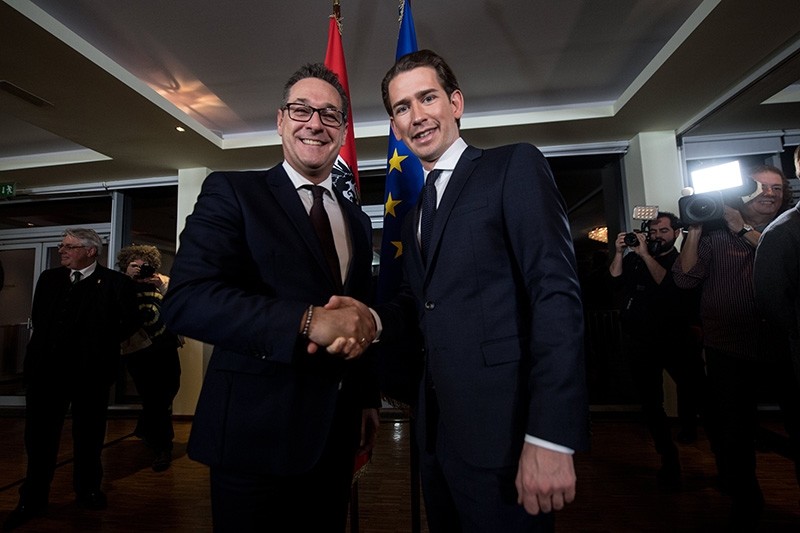 Austrian Foreign Minister and the leader of the Austrian Peoples Party Sebastian Kurz (R) and leader of the right-wing Austrian Freedom Party Heinz-Christian Strache (R) shake hands after a news conference in Austria, 14 Dec. 2017. (EPA Photo)
by Dec 16, 2017 12:00 am

The new government wants more Swiss-style "direct democracy" making it easier for referendums to take place, but Austria's membership of the EU is "excluded," Strache said.

"We stand by the European Union, we stand by the peace project of Europe. But we see various developments critically, and we will of course articulate this and seek partners," Strache told reporters.

Strache has in the past been ambivalent about EU membership, calling Brussels a "bureaucratic monster" and saying that Britain will "probably be better off" after it leaves the bloc.

Sebastian Kurz of the conservative People's Party (OeVP), who will be chancellor in the new coalition, said that the new government is "of course" pro-European.

However Kurz said that during Austria's presidency of the EU in the second half of 2018, Vienna will press for more "subsidiarity", meaning that member states and not Brussels have control in certain areas.

"We have agreed a clear pro-EU stance with the aim of boosting subsidiarity in the EU," Kurz said, favoring an EU that is "stronger in big questions and which should step back on smaller issues".

According to the joint program released on Saturday, the government wants more cooperation with Austria's central and eastern European neighbors, whose relations with Brussels have at times been fraught.

It also wants to contribute to an improvement of relations between the West and Russia.

The FPOe, which has a partnership with Russia's ruling party, has called for EU sanctions on Moscow over Ukraine to be lifted.

The program also says the government will not agree to Turkey joining the bloc. It will "seek allies in achieving a definitive break in (Turkey's) membership talks, in favor of an EU-Turkey neighborhood concept," the program says.

Austria's new government, two months after snap elections saw voters in the Alpine country move to the right, is due to be sworn in next week. Kurz, 31, will then be the world's youngest leader.

Strache's FPOe secured the interior, defense and foreign ministries, amongst others, while OeVP-controlled ministries will include finance, economy and justice.