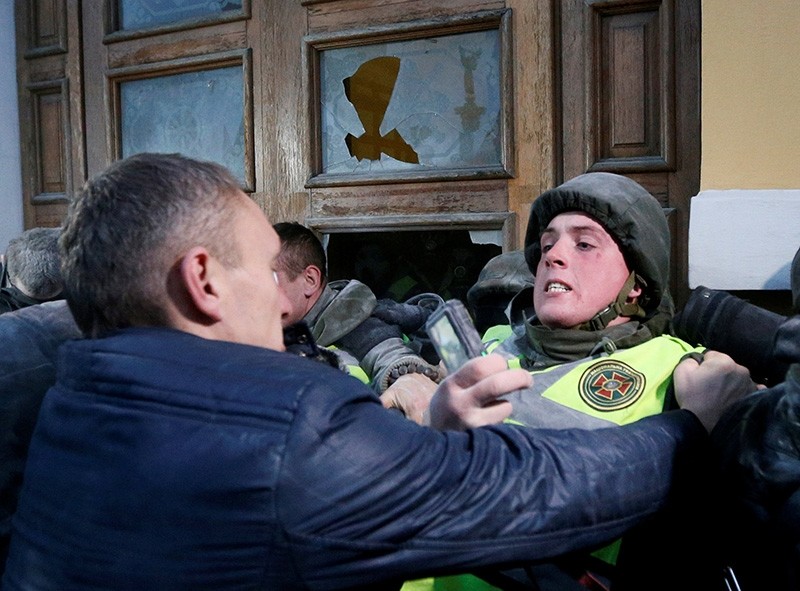 Supporters of former Georgian President and Ukrainian opposition figure Mikheil Saakashvili clash with police as they try to break into the building of the International Art Center in Kiev, Ukraine, Dec. 17, 2017. (Reuters Photo)
by Associated Press Dec 17, 2017 12:00 am

About 5,000 supporters of opposition leader Mikheil Saakashvili rallied in Ukraine's capital Sunday, pushing for the ouster of the nation's president and briefly attempting to seize a public building.

Saakashvili's followers marched across Kiev and then rallied with the former Georgian president and ex-Ukrainian governor on Independence Square to call for President Petro Poroshenko's impeachment.

"I'm offering Poroshenko to have public negotiations to discuss just one thing: his resignation and the removal of oligarchs from power," Saakashvili told the crowd.

He then suggested setting up a headquarters for the protest in the October Palace, a performing arts and conference center overlooking the square.

People in the crowd shattered windows and tried to break the doors open, but police prevented them from getting inside.

City officials said hundreds of children were attending an event in the October Palace at the time.

Ukraine's Interior Ministry said more than 30 police officers were injured in scuffles with some of Saakashvili's supporters, who allegedly fired tear gas and threw flares and bottles.

After the protesters' actions to enter the building failed, Saakashvili reversed course and called for peace.

Some Western diplomats in Ukraine criticized the attempt to seize the building.

Canadian Ambassador Roman Waschuk said on Twitter that "attempts to seize and damage public buildings are an abuse of the right to peaceful protest." British Ambassador Judith Gough seconded his assessment.

Saakashvili served as governor of Ukraine's Odessa region and then quit the post, accusing Poroshenko of blocking his anti-corruption efforts.

He was briefly detained this month on allegations that he colluded with Ukrainian businessmen tied to Russia to topple Poroshenko. He denies the allegations and a court released him.