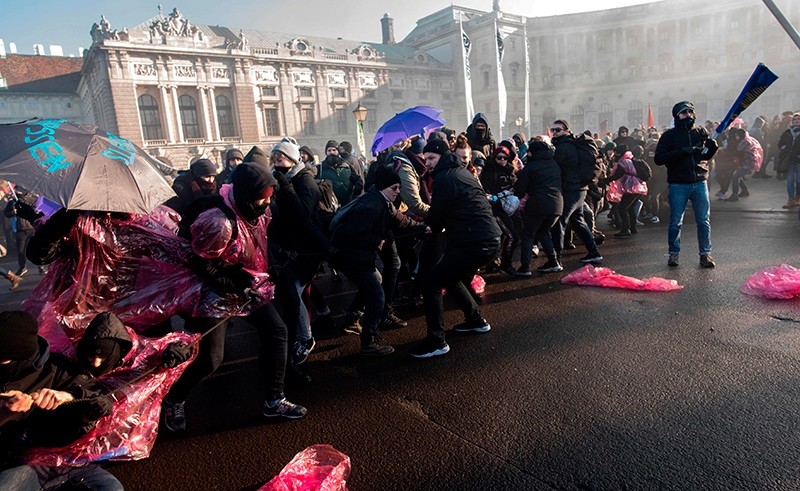 Up to 6,000 demonstrators took to the streets in Vienna on Monday as Austria's far right was sworn in as part of the Alpine country's new government, rounding off a triumphant year for Europe's nationalists.

A heavy police presence of about 1,500 officers, with helicopters overhead and water-cannon trucks at the ready, blocked off the area around the Hofburg palace where the ceremony began at 1000 GMT.

In 2000, when the far-right entered government for the first time, several hundred thousand people took to the streets.

Several separate marches by left-wing and anti-fascist groups converged at the central Heldenplatz square. Placards included "refugees welcome" and "Nazis out" and "No Nazi pigs."

Police fired a smoke grenade when some protestors tried to break through a barricade, a French Press Agency (AFP) photographer said.

The new coalition was agreed on Friday by the conservative People's Party (OeVP) of Sebastian Kurz and the Freedom Party (FPOe), pledging to stop illegal immigration, cut taxes and resist EU centralization.

FPOe chief Heinz-Christian Strache, 48, will be vice-chancellor. He has said that Islam "has no place in Europe" and last year called German Chancellor Angela Merkel "the most dangerous woman in Europe" for her open-door refugee policy.

"We will certainly not be going underground to the Hofburg, but rather with our heads held high in the street," Strache said in an interview with the Kleine Zeitung newspaper, referring to the former imperial palace that houses the president's office.