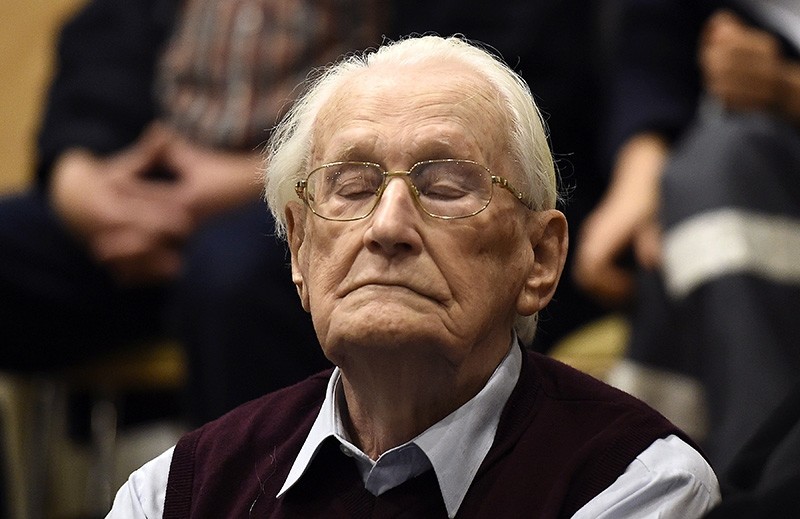 This file photo taken on July 15, 2015 shows convicted former SS officer Oskar Groening listening to the verdict of his trial at the court in Lueneburg, northern Germany. (AFP Photo)
by Dec 19, 2017 12:00 am

A former Nazi SS guard known as the Bookkeeper of Auschwitz, now 96, has filed a challenge against his jail sentence, his lawyer said Tuesday, arguing that imprisonment would violate his "right to life".

In one of the last cases against a surviving Nazi, Oskar Groening was found guilty in July 2015 of being an accessory to the murders of 300,000 people at the death camp.

He has been living at home despite the conviction as he mounted an appeal against his imprisonment.

After a court ruled last month that he was fit to serve his four-year prison sentence, his defense team has now turned to Germany's Constitutional Court, claiming that jailing Groening at such an advanced age flouted his basic rights.

"In terms of constitutional law, it should be examined if the health condition of Mr Groening allows for his basic right to life and physical integrity to be guaranteed" if he went to jail, his lawyer Hans Holtermann told the DPA news agency.

But the case before the Constitutional Court does not trigger a suspension of the sentence, meaning that Groening could be served with the notice to go to jail at any time.

Groening worked as an accountant at Auschwitz, sorting and counting the money taken from those killed or used as slave labour, and shipping it back to his Nazi superiors in Berlin.

He also on several occasions assigned to "ramp duty", processing deportees as they arrived by rail in cattle cars.

During his trial, Groening acknowledged "moral guilt" but said it was up to the court to rule on his legal culpability.

He had previously been cleared by German authorities after lengthy criminal probes dating back to the 1970s.

But a case was reopened against him after the legal basis for prosecuting former Nazis changed in 2011 with Germany's landmark conviction of John Demjanjuk.

Demjanjuk, a former death camp guard, was sentenced not for atrocities he was known to have committed, but on the basis that he worked at the Sobibor camp in occupied Poland and had thus been a cog in the Nazis' killing machine.

Demjanjuk died in 2012 before his appeal could be heard, but that verdict spurred new investigations against several elderly former Nazis.

Among a handful of convictions since is that of Reinhold Hanning, found guilty of complicity in the mass murders at Auschwitz.

He died aged 95 this year, before he could serve his jail term.

A case against former SS medic Hubert Zafke collapsed in September after the court found that the 96-year-old was unfit to stand trial.

More than one million European Jews were killed at Auschwitz before it was liberated by Soviet forces. Yet of the camp's 6,500 SS personnel who survived the war, fewer than 50 were ever convicted.