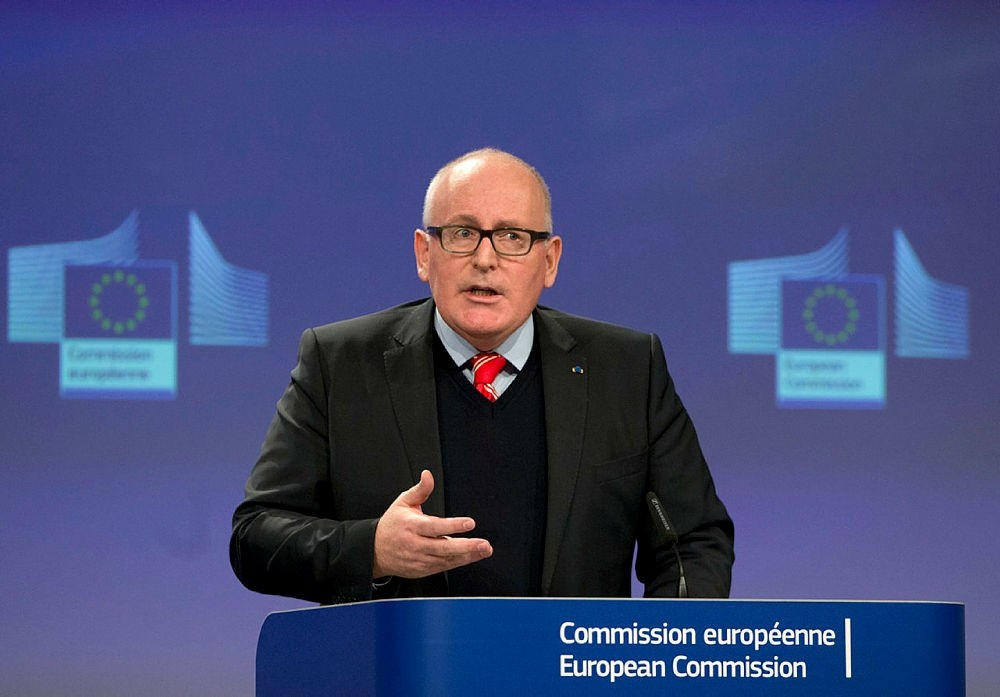 The European Union's executive arm triggered proceedings against Poland on Wednesday over Warsaw's contentious overhaul of the justice system, a move that could lead to unprecedented sanctions as Brussels struggles to keep the recalcitrant member state on a democratic path.

The decision to trigger what is known as Article 7 comes in reaction to several laws that the right-wing Law and Justice party has enacted during its two years in power that give it greater control over the justice system.

Though the step was historic — no EU state has ever been censured in this way — for now it is largely symbolic as it involves a warning and mostly reflects the escalating tensions between Polish government and its EU partners.

The final step in the process would involve sanctions, including the loss by Poland of its voting rights in the Council. This step, however, is considered unlikely to happen because it requires unanimity of EU countries, and Hungary's government has vowed to block any such move.

Either way, the developments reflect a dramatic historical reversal for Poland, birthplace of an anti-communist movement in the 1980s that inspired people across Eastern Europe and a country long praised as a model of democratic transition.

"We are doing this for Poland, for Polish citizens," so they can rely on a fully independent judiciary in their nation, EU Commissioner Frans Timmermans said in announcing the decision.

Timmermans said the decision was taken with a "heavy heart" but had become unavoidable because Poland's authorities could not be persuaded to abandon laws that have been condemned not only by the EU but also by the United Nations, the Organization for Security and Cooperation in Europe and the Council of Europe, the continent's top human rights body.

Two of the laws — one on the Constitutional Tribunal and another one giving the justice minister power to name the presidents of all ordinary courts — have already taken effect. Two others regulating the Supreme Court and a body that appoints judges, the National Council of the Judiciary, were recently passed by parliament and still await the signature of the president.

The Dutch commissioner said that 13 laws adopted by Poland in the space of two years had created a situation where the government "can systematically politically interfere with the composition, powers, the administration and the functioning" of judicial authorities.

But Timmermans gave Warsaw three months to remedy the situation, saying Brussels could withdraw the measures if it did.

Poland's government, which has defiantly gone forward with an overhaul of its court system despite two years of warnings from the EU, took the decision in its stride.

"Poland deplores the European Commission's launch of the procedure foreseen in article seven, which is essentially political, not legal" in nature, the Polish foreign ministry said in a statement, adding that it risks undermining "mutual trust."

Poland's new prime minister Mateusz Morawiecki, who last week insisted on his country's "absolute right" to reform its own judicial system, struck a more conciliatory note while insisting on Warsaw's sovereignty in the matter.

"Poland is as devoted to the rule of law as the rest of the EU. Current judiciary reform is deeply needed," he wrote on Twitter. "The dialogue between the Commission and Warsaw needs to be both open and honest. I believe that Poland's sovereignty and the idea of United Europe can be reconciled."

Zbigniew Ziobro, who is both justice minister and prosecutor general as part of the changes, which have hugely strengthened his powers, said he received the news with "calm" and said Poland's government "must continue the reforms."

He insisted the provisions were drawn from the justice systems of Western EU members.

The ruling party, led by Jaroslaw Kaczynski, has long said its changes were needed to reform a corrupt and inefficient judicial system led by a "caste of judges" who it says are not accountable to anyone.

The Commission must now submit a request to the EU member states to declare "a clear risk of serious breach of the rule of law" in Poland. That is essentially a warning, or in EU lingo, a "preventative" measure, that will require that acceptance of 22 EU countries.

The procedure carries a number of risks. While it is unlikely to prevent the judicial overhaul, the escalating tensions threaten to increase anti-EU feeling in one of the EU member states with the highest support for the bloc, at more than 80 percent in most polls.

Even some of the government's staunchest critics have opposed the step, fearing it will create a sense among some Poles — particularly those who do not understand the complexities of the judicial laws — that they are being targeted unfairly by the EU.

Ryszard Czarnecki, a member of Law and Justice and the vice-president of the European Parliament, called the step an "anti-Polish" move that is really meant to punish Poland for not taking migrants in a mandatory EU resettlement plan.

Zsolt Semjen, the deputy prime minister, described the EU decision as "unprecedented and astounding" and reiterated the intention of Hungarian Prime Minister Viktor Orban to block any sanctions.