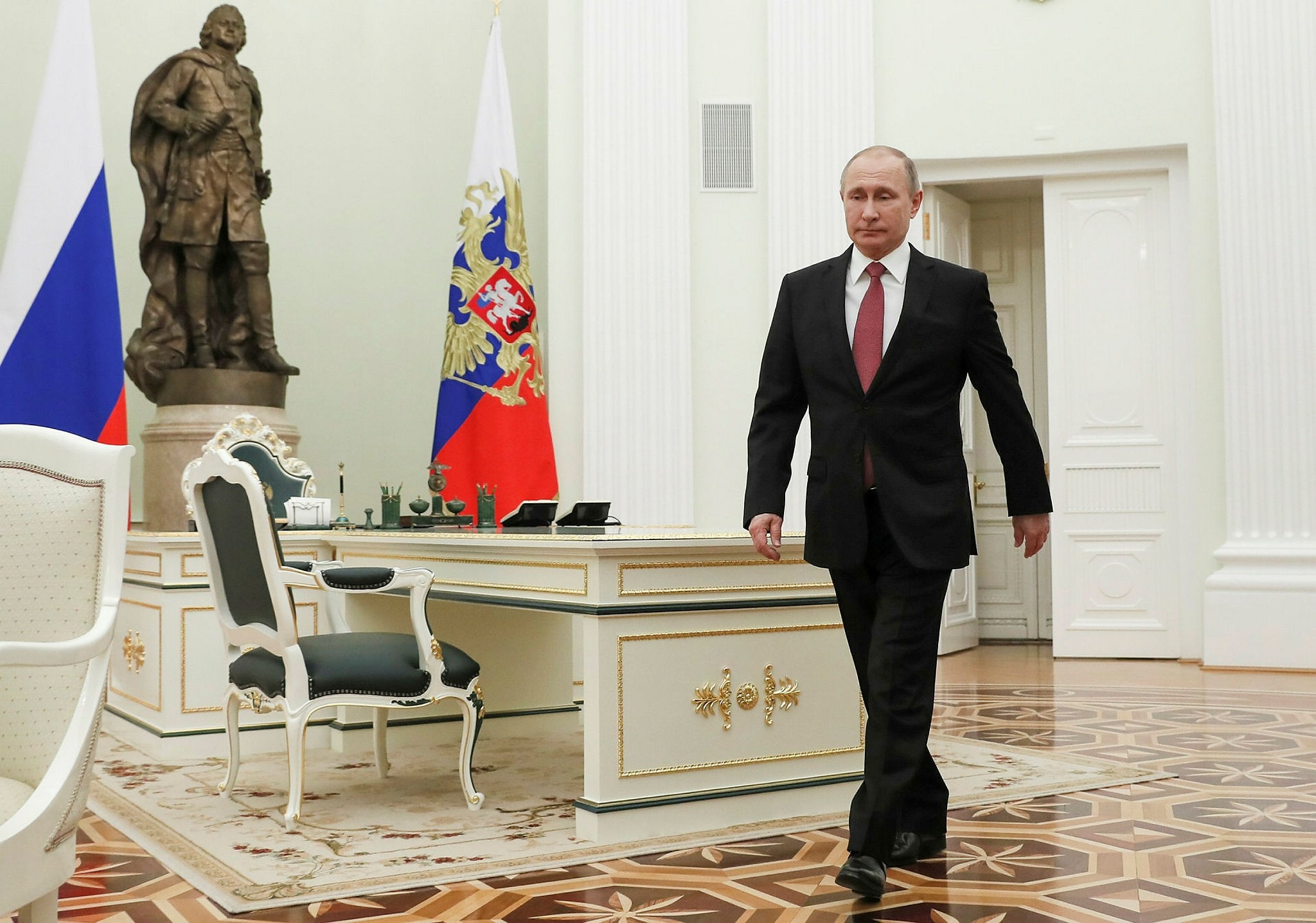 Russian President Vladimir Putin enters a hall to meet his Serbian counterpart Aleksandar Vucic during prior to their talks in the Kremlin in Moscow, Russia, Tuesday, Dec. 19, 2017. (AP Photo)
by Associated Press Dec 20, 2017 12:00 am

President Vladimir Putin hailed Russian spies on their professional holiday Wednesday, saying they have thwarted more than 60 terror attacks in Russia this year.

In a Kremlin speech marking the 100th anniversary of the creation of the Bolshevik secret police, the Cheka, Putin emphasized that it and Soviet-era successor agencies such as the KGB were an "inalienable part of our history."

Putin served with the KGB for 16 years and briefly headed the main state security agency that followed it, the Federal Security Service, or FSB, before his ascent to the presidency. He said in his speech that "no matter how the times were changing, the majority of people who chose that difficult profession were true patriots and defenders of the state."

Earlier Wednesday, Maria Alekhina, a member of the Russian punk band Pussy Riot, was detained after she unfurled a banner that read "Happy Birthday, Hangmen!" outside the Moscow headquarters of the FSB.

Alekhina and Pussy Riot bandmate Nadezhda Tolokonnikova spent nearly two years in prison for an anti-Putin protest inside Moscow's Cathedral of Christ the Savior in 2012.

One of Russia's top human rights groups, Memorial, said that the celebrations of the Cheka's anniversary represented "the mockery of the memory of millions of victims" of Soviet-era purges. "It's a shame of today's Russia," it said in a statement.

Putin made no reference to such criticism in his holiday speech, praising Russian security agencies for "outfoxing foreign intelligence services and dealing blows to organized crime and corruption."

The Russian leader underlined that the fight against terrorism is a top priority, noting that Russia would continue working to "resolutely neutralize hotbeds of international terrorism" following its campaign in Syria.

"It's necessary to strengthen both external and internal security contours protecting Russia from terrorism, conduct work to uproot the criminals' financial and recruitment networks, counter attempts by the extremists and the radicals to influence the young and spread the ideology of hatred, religious intolerance and aggressive nationalism," he said.

He praised Russia's intelligence and security agencies for preventing "over 60 terrorist crimes," but mentioned no specifics.

Putin noted that Russia was ready to "act together with other nations, all those who fight that global threat and ready for joint work and information exchange."

On Sunday, Putin called President Donald Trump on Sunday to thank him for a CIA tip that the Kremlin said helped prevent the bombing of the Kazan cathedral and other terror attacks in St. Petersburg last weekend.

The Kremlin's account of the call was Russia's first public assertion that information from the U.S. has helped prevent an attack. Putin also assured Trump that if Russian intelligence agencies obtain any information about potential terror threats against the U.S. and its citizens, they will immediately share it with their U.S. counterparts.

In his comments Wednesday, Putin nonetheless emphasized the need to counter foreign spies and block foreign attempts to meddle in Russia's domestic politics.

Putin, who runs for re-election in the March 18 vote, has accused the U.S. in the past of trying to foment unrest in Russia.

"It's necessary to put up a reliable barrier against foreign interference in our social and political life, stop the activities by foreign secret services who have been trying to step up their operations in Russia," he said, without naming any specific country.