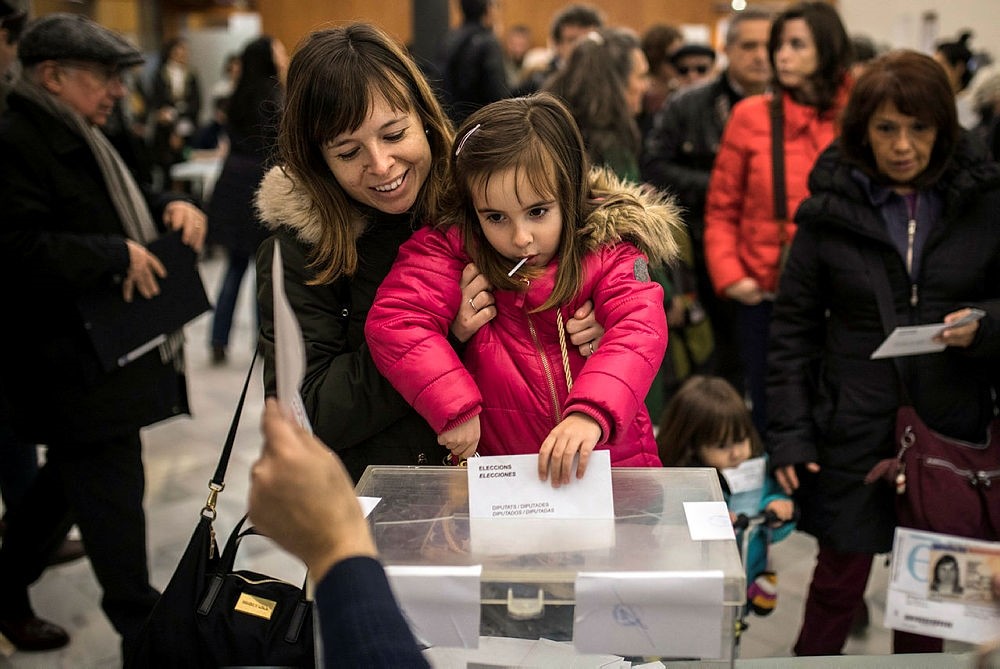 A woman has her child casting the ballot for her for the Catalan regional elections at a polling station in Barcelona, Spain, Thursday, Dec. 21, 2017. (AP Photo)
by Compiled from Wire Services Dec 21, 2017 12:00 am

Catalans voted Thursday in a crucial election that could mark a turning point for their region, just two months after a failed secession bid triggered Spain's worst political crisis in decades.

Turnout for regional elections stood high so far, with 34.7 per cent of all eligible citizens having cast their vote by 1 pm (1200 GMT).

The key regional election is being closely watched in and outside Catalonia to see if support for a separatist push will grow, subside or remain for the time being feeding political tension with Spain.

Elections traditionally take place on a Sunday, but a working day was chosen this time by central authorities to avoid voting on Christmas Eve.

More than 5.5 million Catalans are eligible to vote in the election. Results are expected later on Thursday after polling stations close.

Catalans on both sides of the divide saw the day as a potential moment of truth for their region, following weeks of upheaval and protests unseen since democracy was reinstated following the death in 1975 of dictator Franco.

"Today's vote is about whether we say yes or no to independence in Catalonia," said Gloria Garcia, a telephone operator in Santa Coloma de Gramenet, a working class suburb of Barcelona.

- What next for separatists? -

While the independence question is far from new, it was the banned referendum on October 1 -- and a heavy police crackdown on voters -- that focused the world's attention on the region.

Some 5.5 million people are registered to vote in Thursday's election which is likely to see seven parties winning mandates in the 135-seat regional parliament.

Polls showed that around a million voters remained undecided on the eve of election day, with many Catalans exhausted of the crisis and yearning for a return to normality.

The Spanish government called the vote after stripping Catalonia of its treasured autonomy, in response to a failed independence declaration by the region's parliament on October 27.

But the secession bid was short-lived as Madrid sacked Catalonia's government, dissolved its parliament and called snap elections.

Crucially, however, even if the pro-independence camp wins, it is not expected to attempt another breakaway from Spain but rather try to enter into negotiations with Madrid.

To separatists, the vote is in part an opportunity to strengthen their hand in the standoff with Madrid.

In the staunchly pro-independence town of Vic, 49-year-old professor Alex Arroyo said he had never really supported the separatist cause.

Supporters of the pro-unity camp also see the election as crucial, with the centrist Ciudadanos expected to win the most seats out of the anti-independence parties.

"The issue for me is that we are all Spanish, and Ciudadanos can be the change we need to firmly maintain the unity of Spain," said Garcia, the telephone operator, wearing the red-and-yellow Spanish flag around her neck.

The lead-up to voting day was marked by huge protests by hundreds of thousands by people on both sides of the divide.

It also saw axed Catalan president Carles Puigdemont flee to Belgium, avoiding detention on charges of rebellion, sedition and misuse of public funds for his role in the independence drive.

He had hoped the EU would rally to the separatists' cause -- but that never materialised, with the bloc already rattled by Britain's decision to leave.

Puigdemont has since campaigned virtually, holding rallies via videolink.

"Today we will show, once again, the strength of an indomitable people," he tweeted Thursday.

His deputy Oriol Junqueras remained in Spain and was jailed along with others pending an investigation into the same charges.

Opinion polls suggest Junqueras's leftist ERC party could win, though it is unclear whether he or his deputy Marta Rovira would be named president.

"Hope is what guides us today, bearing in mind that many people today aren't able to exercise their democratic rights, the first among them Oriol Junqueras," Rovira told reporters as she cast her ballot.

Over on the other side, Ciudadanos is close to ERC according to polls and some suggest it could win under Ines Arrimadas, a charismatic 36-year-old.

Supporters of Arrimadas cheered "presidenta! presidenta!" as she voted.

"We have worked very hard in the past few years as opposition leaders in the (regional) parliament, and today we hope to reap the fruits of our labour," she said.

Participation stood at 34.7 percent by the early afternoon, official data showed -- just short of the 2015 record.

At stake in the vote is the economy of a region that has seen its tourism sector suffer and more than 3,000 companies moved their legal headquarters since the referendum.

But whatever the result, voters and analysts predict no single party will win a decisive majority, which will force negotiations to form a government.