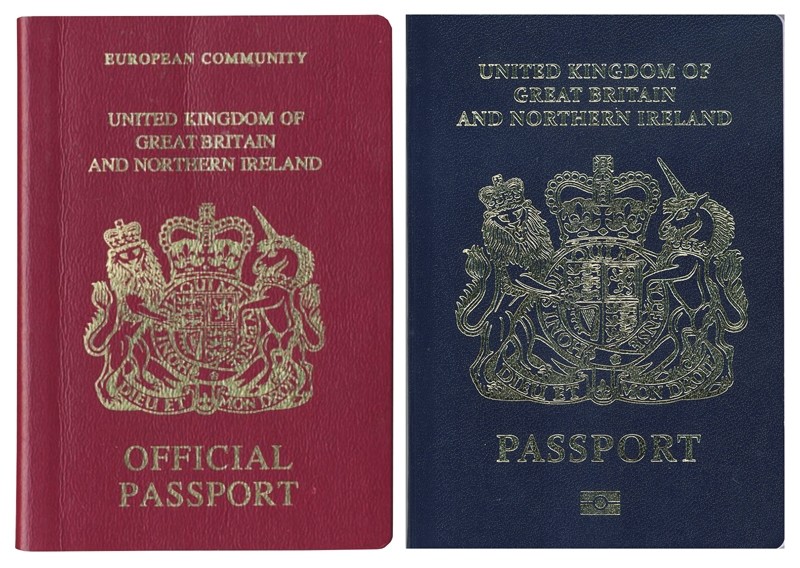 A combination image of two handout pictures released on December 22, 2017 by the UK passport office shows a burgundy (L) and blue United Kingdom passport. (AFP Photo)
by Compiled from Wire Services Dec 22, 2017 12:00 am

Britain's classic blue passport, for many a key symbol of national sovereignty, will be reintroduced after the country leaves the European Union, the government said on Friday.

"The UK passport is an expression of our independence and sovereignty -- symbolising our citizenship of a proud, great nation," Prime Minister Theresa May said.

"That's why we have announced that the iconic blue passport will return after we leave the European Union in 2019."

Politicians in favour of Britain's departure from the EU were thrilled by the highly symbolic change, while those who wanted Britain to remain in the bloc mocked their excitement.

Bringing back the old passport, just as Britain is negotiating the terms on which it leaves the EU in March 2019, will please both those who voted to leave the bloc and many of those who voted to remain, Immigration Minister Brandon Lewis said.

"Leaving the EU gives us a unique opportunity to restore our national identity and forge a new path for ourselves in the world," Brandon Lewis said, announcing the switch.

He added that the new passports would be "one of the most secure travel documents in the world" and feature a raft of updated security measures to protect against fraud and forgery.

The current paper-based picture page will be replaced with a new, super-strength plastic polycarbonate material that will be more difficult to alter.

British passports had dark blue covers from 1921. But Britain switched to burgundy from 1988, in common with other passports of what was then the European Community.

Britain is set to leave the EU in March 2019. After that, burgundy passports will continue to be issued -- although without reference to the EU -- until October 2019, when the new contract for passport provision begins, ushering in the return of blue travel documents.

Current EU country passports contain common, though non-binding, features agreed by member states, including the burgundy colour, the typeface and the words "European Union" first above the country name.

Britain's pro-Brexit tabloid The Sun hailed the decision "to scrap the EU's burgundy model forced on the nation" and return to the "iconic" dark blue passport.

"In the 2016 referendum, we wanted our passports back. Now we've got them back!"

Andrew Rosindell, a Conservative MP, wrote on Twitter: "A great Christmas present for those who care about our national identity -- the fanatical Remainers hate it, but the restoration of our own British passport is a powerful symbol that Britain is back!"

However, others were hardly bursting with delight.

Scottish First Minister Nicola Sturgeon did not welcome the change.

Her left-wing, secessionist Scottish National Party wants Scotland out of the United Kingdom then back in the EU.

"The open, inclusive, civic, internationalist Scottish independence movement that I'm so proud to be part of could not be further removed from this insular, inward-looking, blue passport-obsessed nonsense," she said.

Meanwhile television comedy writer Simon Blackwell said: "Why do we need any colour passport? We should just be able to shout, 'British! Less of your nonsense!' and stroll straight through."