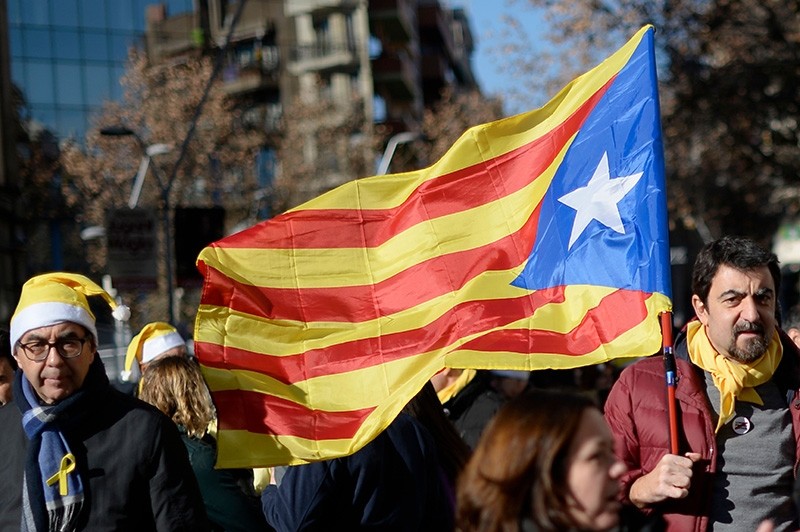 A man walks with a Catalan pro-independence 'Estelada' flag after a demonstration to support Catalan political prisoners (AFP Photo)
by Jan 01, 2018 12:00 am

Spain's foreign minister claimed Monday that the Catalan independence crisis had cost the country "a billion" euros ($1,199,832) as fallout from the turmoil continued to hamper growth in the wealthy region.

Luis de Guindos said the slowdown in growth in Catalonia, which accounts to around a fifth of Spanish GDP, was hampering the eurozone's fourth largest economy as a whole.

"Catalonia used to have growth above that of Spain, it was one of the drivers of the Spanish economy," he told Spanish radio.

"However, in the fourth quarter, it's become a burden."

De Guindos estimated the crisis could "easily have cost a billion euros" ($1.2 billion).

Spain was plunged into its deepest political crisis in decades when separatists in Catalonia's regional government declared independence in October following a banned referendum on the topic.

Led by Prime Minister Mariano Rajoy, Madrid invoked powers provided for by Spain's constitution to suspend the region's cherished autonomy, sack its government and parliament, and call fresh regional elections in a bid to head off the secession drive.

But separatist parties won the most seats in the Dec. 21 vote, and with the Catalan issue likely to drag on well into 2018 there are fears the crisis could hamper Spain's recovery from the 2007-2008 financial crisis.

More than 3,100 companies have already moved their legal headquarters from Catalonia, including major banks and retail firms.