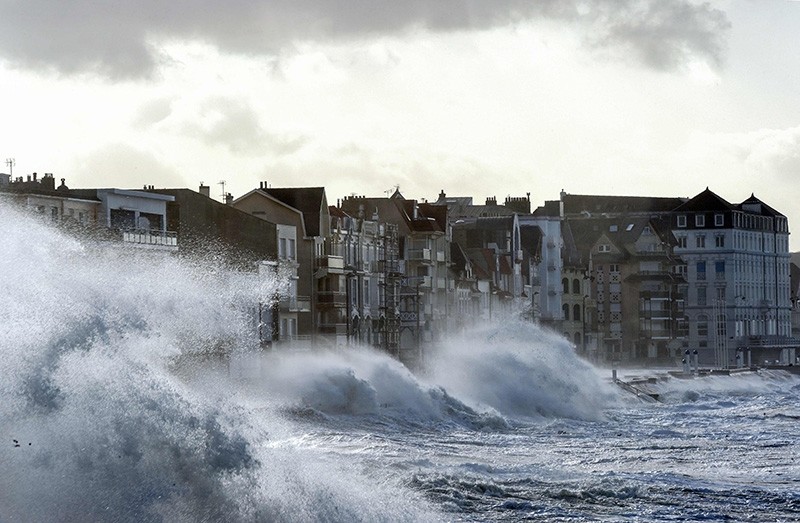 Waves crash against the seafront of Wimereux, northern France, as storm Eleanor hits the northern part of France on Jan. 3, 2018. (AFP Photo)
by Compiled from Wire Services Jan 03, 2018 12:00 am

One person was killed and 23 were reported injured in France on Wednesday as the country took the brunt of storms that swept in from the Atlantic overnight, also hitting Ireland, Britain, Germany and the Netherlands.

Storm Eleanor's sole reported casualty to date died due to a tree falling at a resort in the French Alps, according to French broadcaster BFMTV.

Four of the 23 injured people were seriously hurt. According to the Interior Ministry, the seriously injured include a man who fell off his roof, a woman who was hit by a block of cement, and a motorcyclist who crashed into a tree.

The French aviation authority said air traffic has been suspended at Strasbourg and Basel-Mulhouse, both in eastern France, due to fierce winds.

The Eiffel Tower was also closed Wednesday morning with gusts reaching 140 km/h (87 mph) at the top of the Iron Lady.

Several ski resorts were closed due to the risks posed by the storms, with warnings of a very high danger of avalanches.

In Germany, winds gusts of up to 120 kilometers an hour hit areas of the southwest, disrupting shipping and motor vehicle traffic while workers attempted to clear fallen trees from blocked rail lines across the region.

There were no reports of injuries, German officials said.

French railway company SNCF said that regional trains were not working in the Normandy and Alsace regions. Long-distance trains were running normally.

French maritime authorities reported that a yachtsman had been rescued in a dangerous helicopter operation in high seas and amid 7-meter waves off the Normandy coast Tuesday night.

In France and Ireland, electricity workers scrambled to restore power to hundreds of thousands of households.

Power had meanwhile been restored to more than 70,000 households in the north and the Paris region after the passage of the storm.

Irish state electricity company ESB said that by noon Wednesday (1200 GMT), electricity had been restored to 134,000 customers, but 16,000 homes, farms and businesses remained without power.

Another 20,000 properties had lost power in Northern Ireland, the Press Association reported, while 2,500 homes and businesses were cut off from the grid in parts of England.

About 200 planes had to be canceled and trains were moving at reduced speeds in the Netherlands as the low-lying country prepared for the first major storm of the year.

Dutch authorities and train service personnel reported that train service has been suspended in coastal areas. Car traffic has also been blocked on dikes and bridges near the sea in anticipation of the storm.

In anticipation of 3-meter flood surges, the country's flood barrier on the North Sea was also being activated, the first time it has been pressed into service since a storm in 2014.