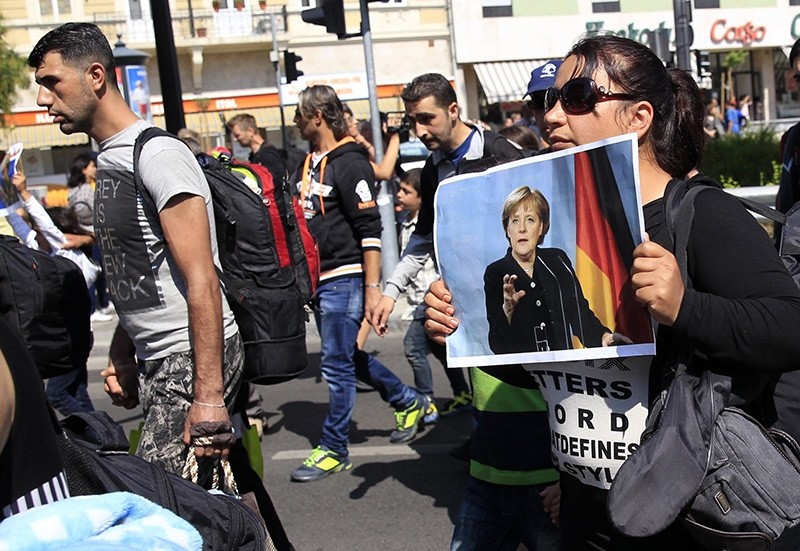 A womanl holds a picture of German Chancellor Angela Merkel as migrants set off on foot for the border with Austria from Budapest, Hungary, September 4, 2015. (Reuters Photo)
by Jan 05, 2018 12:00 am

Germany's conservative CSU party has called for more refugees to be sent back to their country of origin, ahead of coalition talks in which migration policy is likely to be a key point of contention.

"The unification of internally displaced persons [with their families] in Iraq, for example to Mosul or Tikrit, is already taking place on a large scale, also with significant support from the Development Ministry," CSU politician Gerd Mueller, who is the German development minister, told dpa.

"More than 200,000 internally displaced persons have already returned. For this reason, it should also be possible to return Iraqi families from Germany to their homeland."

"Iraq is largely freed from Daesh. In many places it is once again possible to bring families together," Mueller said.

The CSU, the sister party of Chancellor Merkel's Christian Democrats, are holding their winter conclave at Seeon Abbey in Bavaria.

Migration policy is likely to be a key issue in coalition talks set for Sunday between the CSU, Merkel's Christian Democrats (CDU) and the center-left Social Democrats (SPD). German politicians have failed to form a new government since parliamentary elections on September 24.

The situation is different in Syria, Mueller said.

"We expect the Foreign Ministry to provide an assessment of the security situation there. This is also long overdue for Afghanistan. On this basis, preparations for the repatriation and reunification of refugees can also be started there."

The CSU have also agreed on a controversial list of demands on security and immigration, including reductions in benefits for asylum seekers and age tests for young refugees.

Refugee policy has already been in the spotlight during the CSU meeting, at which Hungarian Prime Minister Viktor Orban, a vocal critic of liberal migration policies, is a guest.

Martin Schulz, the leader of Germany's Social Democrats (SPD), called on CSU leader Horst Seehofer to set clear boundaries with regard to refugee policy and press freedom, in comments published in the German daily Bild.

Hungary has received criticism from the European Union for rejecting quotas for refugee redistribution within the bloc.

Germany cannot simply continue to pay the usual sums into the next EU budget if net recipient countries - like Hungary and Poland - do not contribute towards alleviating the burden of refugee arrivals on other member states, Schulz said.

"Martin Schulz is not aware of the most basic facts," Szijjarto said in a statement posted to the foreign ministry website.

He added that Schulz is "in a convenient position," as Hungary protects the frontier of the EU passport-free Schengen zone, while "continually stabbing Hungary, the very country which is also protecting all German citizens, in the back."