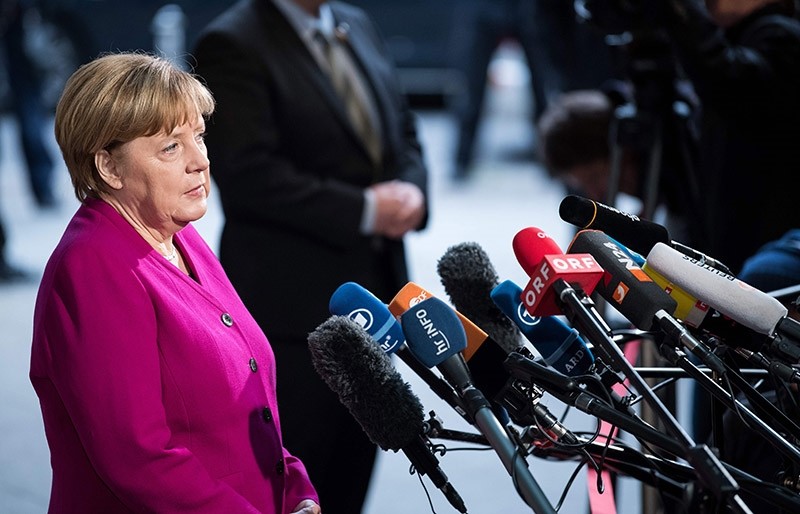 German Chancellor Angela Merkel gives a statement prior to a meeting with the leaders of the conservative CDU/CSU union and the social democratic SPD party in Berlin. (AFP Photo)
by Associated Press Jan 07, 2018 12:00 am

German Chancellor Angela Merkel embarked Sunday on talks with the center-left Social Democrats on forming a new government, with leaders stressing the need for speed as they attempt to break an impasse more than three months after the country's election.

Merkel's conservative Union bloc and the Social Democrats have run Germany together for the past four years. But the Social Democrats vowed to go into opposition after a disastrous election result Sept. 24, and only reluctantly reconsidered after Merkel's attempt to build a coalition with two smaller parties collapsed in November.

The effort to form a government has already become post-World War II Germany's longest ahead of the preliminary talks starting Sunday.

Leaders aim to decide by Friday whether there's enough common ground to move on to formal coalition negotiations — a move that would require approval by a Jan. 21 congress of the Social Democrats, many of whom are deeply suspicious of another coalition. Those negotiations, if they happen, would likely take weeks and the Social Democrats have promised to hold a ballot of their entire membership on any coalition deal that emerges.

If the parties don't form a coalition, the only remaining options would be for Merkel's conservatives to lead an unprecedented minority government, or a new election.

"I think we can succeed," Merkel said as she arrived for the talks. "We will work very quickly and very intensely ... and always have in mind what people in Germany expect of us — they of course expect of politicians that they solve their problems."

"I am going into these talks with optimism, but it is clear to me that a huge amount of work lies ahead of us in the coming days," she added.

The Social Democrats' leader, Martin Schulz, said his party will take a "constructive and open-ended" approach.

"We are not drawing red lines, but we want to implement as many red policies as possible in Germany," he said, referring to the party's color. "Germans are entitled to have this go quickly."