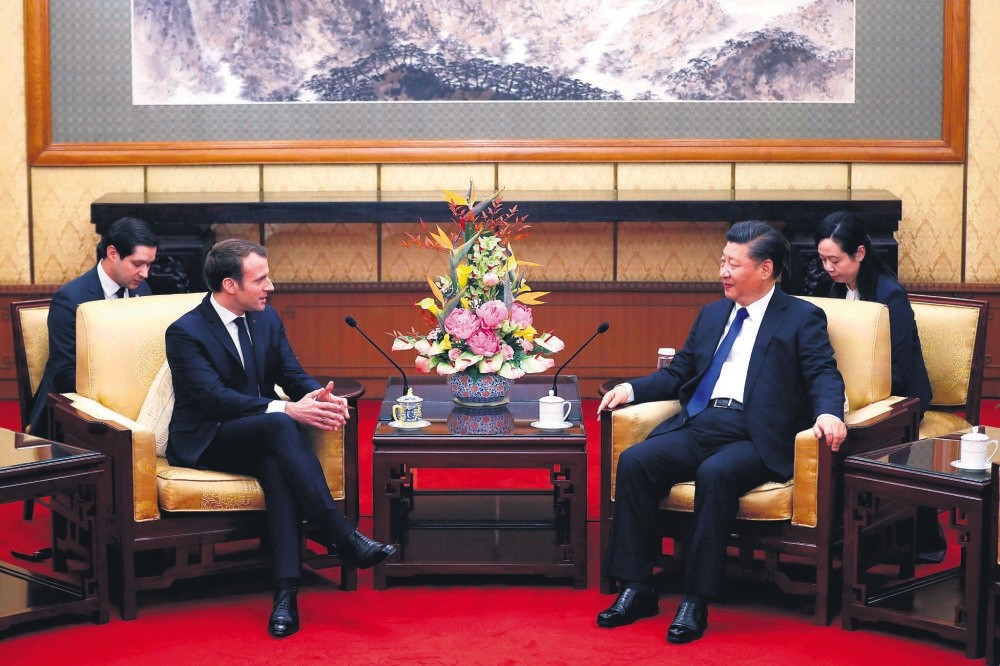 In a French version of panda diplomacy, French President Macron bets on equine diplomacy during his first state visit to China, presenting Chinese counterpart Xi Jinping with a horse

With the China's Silk Road revival plan on the top of the agenda, French President Emmanuel Macron yesterday began his three-day visit while offering Chinese leader Xi Jinping a horse of the elite French Republican Guard.

Macron is on a three-day tour of China starting with a stop in Xian, an eastern departure point of the ancient Silk Road where he visited the Terracotta Army with his wife Brigitte.

An adept of soft diplomacy and symbols, Macron picked an 8-year old brown gelding named Vesuvius from the presidential cavalry corps and braved stringent Chinese quarantine checks to offer it to President Xi Jinping. It is the first time France has offered one of the elite cavalry corps' horses and is also a response to China's "panda diplomacy", after Macron's wife Brigitte became the godmother of a Chinese panda lent by Beijing to a zoo near Paris.

Macron said yesterday China and Europe should work together on Beijing's "Belt and Road" initiative, a project aiming to build a modern-day "Silk Road" he said could not be "one-way".

"By definition, these roads can only be shared. If they are roads, they cannot be one-way," he said.

Unveiled in 2013, the Belt and Road project is aimed at connecting China by land and sea to Southeast Asia, Pakistan and Central Asia, and beyond to the Middle East, Europe and Africa.

Xi pledged $124 billion for the plan at a summit in May but it has faced suspicion in Western capitals that it is intended more to assert Chinese influence than Beijing's professed desire to spread prosperity.

While France had been cautious about the plan, Macron heartily endorsed the initiative. "It represents a real opportunity to create bridges, through exchange, between countries and civilizations, just as the ancient silk routes once did," he said in an interview with the Chinese website China.org.cn., according to AFP.

"I think it's very important that Europe and China strengthen their collaboration on the initiative. France is ready to play a leading role in this."

British Finance Minister Philip Hammond said in December Britain, which is quitting the European Union, wanted closer cooperation with China over the Belt and Road scheme.

Macron said Europe should not be "naive" in its trade relations, pushing in Brussels for more stringent anti-dumping rules against imports of cheap Chinese steel. In June, he urged the European Commission to build a system for screening investments in strategic sectors from outside the bloc, which drew criticism from Beijing.

Macron's first official visit to Asia marks a new stage for his diplomacy, which has so far been concentrated on Europe and Africa. He plans to seek a "strategic partnership" with Beijing on issues including terrorism.

On climate change, Macron said he would talk to Xi about "relaunching the climate battle" by preparing an increase in their engagements to combat global warming at the COP 24 talks in Poland later this year.

He praised China for committing to the Paris accord after U.S. President Donald Trump notified that America would pull out of the pact. "China kept its word," he said. "You demonstrate your immense sense of responsibility." Cooperation will "show the world that the French and Chinese are capable of making our planet great and beautiful again", he said in Chinese.