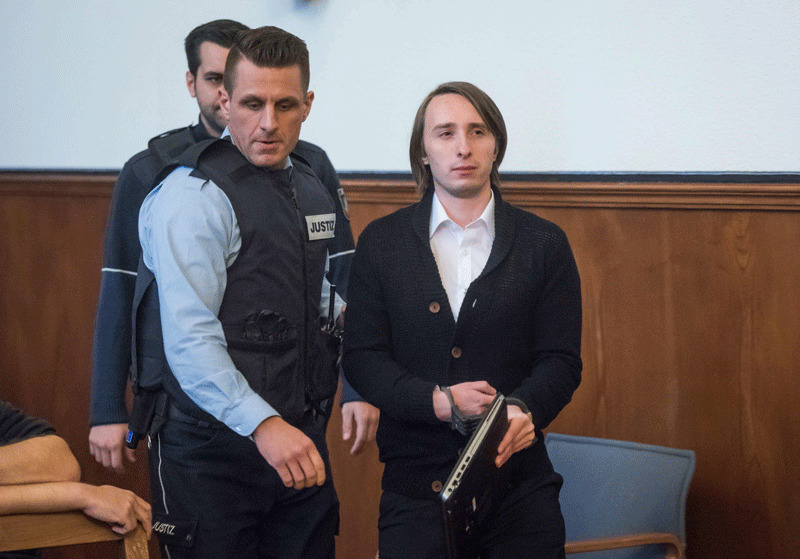 The German-Russian suspect, known as Sergei W, who is accused of having carried out a bomb attack on the Borussia Dortmund football team's bus, arrives for his trial on January 08, 2018 at the district courthouse in Dortmund, Germany (AFP Photo)
by Compiled from Wire Services Jan 08, 2018 12:00 am

A German-Russian man admitted Monday to carrying out a bomb attack on the Borussia Dortmund football team's bus in an elaborate bid to make a fortune on the stock market.

"I deeply regret my actions," said the man, identified only as Sergei W. in keeping with German convention in court cases to protect the identity of defendants.

In a statement handed to the court in the western German city, he insisted he did not aim to kill or hurt anyone.

Prosecutors say the three fragmentation bombs each contained up to a kilogram (2.2 pounds) of a hydrogen peroxide mixture and around 65 cigarette-sized metal bolts, one of which ended up lodged in Bartra's headrest.

After initial fears of a jihadist attack were dismissed, W. was arrested 10 days later.

The the 28-year-old electrical technician has been charged with 28 counts of attempted murder and causing an explosion for the April 2017 attack that prosecutors say was part of an elaborate money-making scheme.

He had allegedly remotely set off the three explosive devices hidden in a hedge as the bus was leaving the team hotel for a Champions League match.

Prosecutors charge that W. had sought to profit from an anticipated plunge in the club's stock market value by cashing in on so-called put options, essentially bets on a falling share price.

He was staying in the same Dortmund hotel as the players, had a view of where the bombs went off and had bought the put options on the team's shares on the day of the attack, prosecutors said.

W. reportedly drew attention at the hotel, first by insisting on a window room facing the front and then, in the chaos after the blasts, by calmly walking into its restaurant to order a steak.

Dortmund, also known as BVB, is the only football club in Germany that is listed on the stock exchange.

The German-Russian man faces a possible life sentence for the bombing, which prosecutors said was aimed at forcing down the club's share price in order to reap a profit on his investment.

An electrical engineer had bought more than 26,000 euros ($31,000) of options and contracts ahead of the attack, entitling him to sell the football club shares at a pre-determined price.

Instead, W. allegedly sold the options days after the attack, making just 5,900 euros.

A day after the attack, Dortmund played their postponed game against Monaco and lost, prompting then coach Thomas Tuchel to rail against UEFA for not giving the players time to come to terms with their fear before returning to the pitch.

W. faces life in prison if found guilty, although in Germany parole is usually granted after 15 years.

The trial is expected to run for 16 more days of hearings.