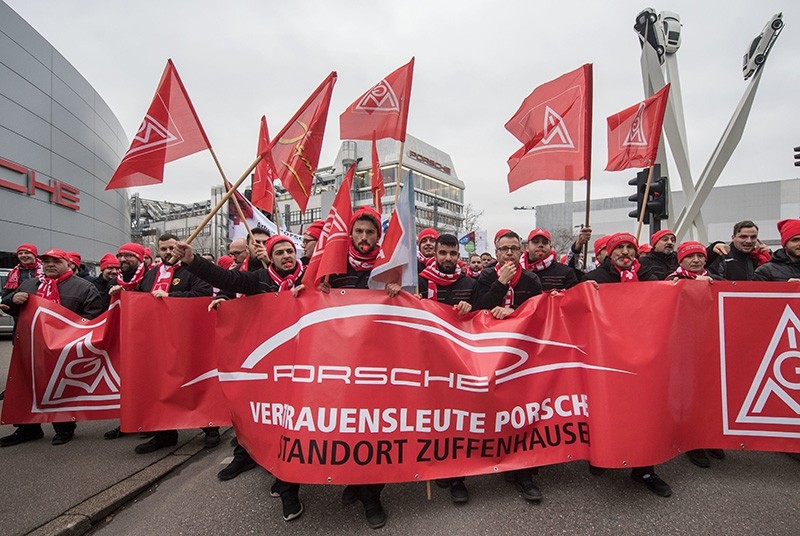 Employees of the Porsche AG company hold flags with the logo of Germany's metalworkers' union IG Metall as they demonstrate on January 8, 2018 in front of their plant in Stuttgart, southern Germany. (APF Photo)
by Compiled from Wire Services Jan 09, 2018 12:00 am

The walkouts by thousands of IG Metall union members are aimed at increasing pressure on employers heading in to a new round of labor negotiations in the southern state of Baden-Wuerttemberg on Thursday. Agreements reached in one region are typically applied nationwide.

The labor action came as the Economy Ministry released new figures underlining the strength of the German economy, Europe's biggest. They showed that industrial production picked up strongly in November after two months of declines.

Figures showed industrial production rose 3.4 percent compared with the previous month, following an October that was heavy on public holidays.

"After a weak start to the fourth quarter, the German economy has returned to full speed," said ING economist Carsten Brzeski. "With November finally being a month that was not heavily affected by vacation planning or weather, the German industry could finally show its real face."

In a separate report, the Federal Statistical Office said German exports — a traditional strength of the economy — were up a strong 4.1 percent in November compared with October, following small declines in the two previous months. Imports increased by 2.3 percent.

In arguing for a 6 percent wage increase, the IG Metall union argues that 2 percentage points would compensate for inflation while workers deserve the other 4 percent as a share in companies' increased productivity as well as the businesses' "economic success and increased prosperity."

Additionally, the union is lobbying for workers to be able to reduce their work weeks from 35 hours to 28 hours for up to two years, with a guarantee they can return to full hours, to help them "better balance work and private lives," in particular in raising children.

Ahead of a round of regional negotiations due to begin on Thursday, employers have so far offered 2 percent plus a one-off 200 euro ($240) payment in the first quarter and rejected demands for shorter hours.

In the state of North Rhine-Westphalia alone, the industrial heartland of Germany, workers at 140 companies including Siemens and Thyssenkrupp staged walkouts and marched outside factory gates carrying banners.

In Bavaria to the south, companies including automotive suppliers Schaeffler and ZF were affected.

That adds to more than 15,000 workers that had already taken action across the nation by Monday, and IG Metall has announced further walkouts for Wednesday.

Such industrial action is common in Germany before sector-wide pay negotiations, and similar walkouts took place in 2016 and 2015.

The union has made it clear it is drawing a line in the sand regarding shorter working hours and has threatened to move beyond walkouts lasting only a few hours to all-out strikes across the sector.

Talks between unions and employers' associations are set for Thursday in the southwestern state of Baden-Wuerttemberg, where Volkswagen's Porsche, Mercedes-Benz maker Daimler and automotive suppliers including Bosch are based.

"If we do not see any willingness to even discuss the topic seriously on Thursday, the situation will escalate further," Roman Zitzelsberger, head of IG Metall in Baden-Wuerttemberg, told German daily Handelsblatt.

Next door in Bavaria, home to companies such as engineering group Siemens and carmaker BMW, negotiations will resume on Jan. 15, and to the north in North Rhine-Westphalia on Jan. 18